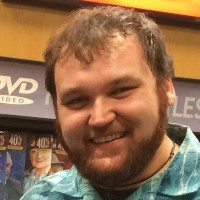 Chris grew up during the Disney renaissance of animation and took his first trip to Disney World when he was ten. Even though he has loved Disney his whole life, his obsession didn’t start until he began planning a trip for his honeymoon. Right now, his primary job (at least the one that doesn’t pay the bills) is to indoctrinate his daughter with his love of Disney while at the same time convincing his wife to move to Orlando so he can become a tour guide in the parks.