The Enchanted Tiki Room – Under New Management blends the original cast of characters into a witty, upbeat show that features several new choreographed musical numbers. One song guests are sure to recognize is a stirring rendition of “Friend Like Me,” sung by Iago. Another is “The Tiki Tiki Tiki Room” song, led by
Jose. 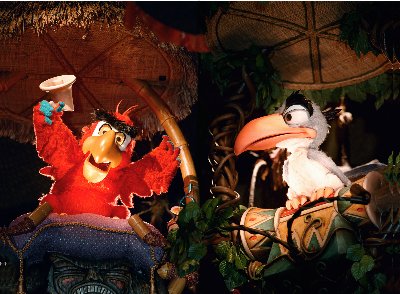 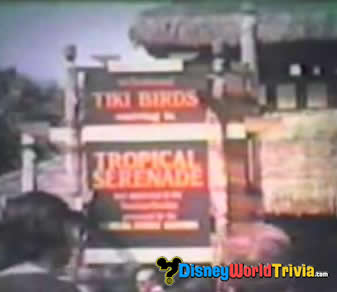 Morris: I just flew in from Hollywood. My client’s the new owner of this birdcage.

William: What? Are you cuckoo? My client’s the new owner. Disney gave me an exclusive.

William: I gave it a bird’s eye glance.

Morris: And you call yourself a talent agent? I negotiated my tailfeathers off for this deal.

William: Well, my client does not share credit. He’s a very big bird.

Morris: Your client is Big Bird?

William: Not Big Bird. A big bird, you birdbrain.

Morris: Well, your dim little star is now half owner of the Enchanted Tiki Room with my superstar. William and Morris

Morris: Stop grousing! Just look at these paying customers waiting to get in.

William: Did you say “paying”?

Morris: As in money.

William: As in ten percent? Hey, who am I to go against the status crow?

Cast Member: I’m sorry to interrupt you guys, but they’re calling us inside. Ladies and gentlemen, in a few moments, these doors behind me will be opening into the world of joyous song and island splendors, the Enchanted Tiki Room.

William: Wait! Our clients are not here.

Morris: Sorry. Anyway, babe, I’ve gotta fly this coop and migrate back to Hollywood. My birds’ll call your birds. We’ll do lunch.

William: Oh yeah? Big deal, you hockey puck! I’ve got the Mighty Ducks in the wings.
William and Morris

Morris: You do not.

Morris: You don’t. Come on.

Morris: Level with me. Put the bubble between the lines …

Cast Member: And now I’d like to introduce you to our master of ceremonies, Jose. …….. Jose’s asleep, so on the count of three, everybody say, “Wake up, Jose!” One, two, three —

Michael: So it is. Pierre, you rascal you, let’s put on the show!

Pierre: Mon ami, I am always ready to put on ze show. As is my good friend, Fritz.

Michael: Wait, wait! We forgot to wake up the glee club.Jose

Welcome to our tropical hideaway,
You lucky people you.
If we weren’t in the show starting right away —

Jose: We’d be in the audience, too.

Iago: What is that? I’m gonna toss my crackers. And these people below me, they ain’t gonna like that. Trust me.Zazu

Iago: Well, look what the cat dragged in: Zero!

Iago: What’re you squawkin’ about?!

Pierre: Pardon moi, monsieur Iago, but I am afraid that your friend is right.

Iago: He’s not MY friend!

Iago: Obviously, you birds don’t know who we are. Don’t you guys ever fly to the movies?

Jose: We don’t get out much.

Iago: Well, don’t get too attached, chumps! ‘Cause we’re the new owners!

Iago: That’s right. Now listen, you birdbrains, if you’re gonna keep your jobs, ya gotta get hip. I know all about it, see?

(Music from “A Friend Like Me,” from “Aladdin,” begins)

‘Cause I’m a very famous movie star
And all of Hollywood drops my name.
Who cares about Aladdin or Jafar?
I’m the one with all the looks and fame.

I got a million crackers in the bank,
And I plan to get a zillion more!
And you guys will all have me to thank
When they’re linin’ up at the door.

You are boring Tiki birds.
I’m a big cele-birdy.
That’s why I’m gonna go and change your show.
Ain’t it great to have a friend like me? Fritz

My, how time flies.
Get a life, you guys!
You’re ancient history.

Can your tails do this?
Can your wings do that?
Can you bad birds sing
In punk or rap?

Can ya rock and roll?
Well, listen here.
It’s a whole new world, so ya better get hip,
Or your audience will disappear.

Zazu: Iago, pleeeeeeease. The Tiki gods can hear you.

Iago: If I hear one more word about those Tiki-tacky, Polynesian, pineapple-pickin’, wood-for-brains, MORON Tiki gods …

Iago: Hey! Who turned out the lights? Pierre

Zazu: That would be the … moron Tiki gods.

Pierre: Oui, oui. We are doomed.
Click the dot to hear Hot! Hot! Hot!(begins singing) Doom is in the air.

Zazu: What — what was that?

(Uh-oa, the Tiki Goddess of Disaster, emerges from the center of the room.)

(Chanting continues in the background.)

Uh-oa: Be careful, my fine feathered little friend! When ya mess with Polynesia, the Tiki gods will squeeze ya!
(singing) You’re messin’ with me, baby ..

Tiki goddess chorus: Ain’t the thing to do …

Iago: Wait! Some of my best friends are Tiki gods!

Uh-oa: I have cursed you for pushing your luck!

Uh-oa:
It won’t help to yell.
You are under my spell.
Look out, parrot!
You’re a dead duck!

(Iago is banished with much noise and smoke, and disappears.)

Pierre: Perhaps it would be best to let the Tiki gods have their say, ne c’est pas?

Zazu: Right. And now, here they are, the pop idols of Polynesia. The one, the only, the Tiki gods!

(The various Tiki statues and flowers throughout the room begin to move and sing.)

Tiki chorus: In the still of the night.

Soloist: In the still of the ni-i-ight.

Tiki chorus: Those chicks are hot!

Iago: Ha ha!! These gods were the greatest act I’ve ever heard! This place is gonna be a gold mine. No more worries!

Iago: Hunky tuna tostada??!! What a stupid phrase! But that’s okay, my friend.

Iago: That’s right. And now that we’ve got a smash show on our wings, LLLLLLLET’S PARTY!!

(Beautiful white female birds descend from the ceiling on an elaborate spinning perch, and begin to sing.)Lady Birds

Click the dot to hear CongaCome on birdies, shake your feathers, do the conga.
No, we can’t control ourselves any longer.
Get into the Tiki rhythm of a song-a.
This is where the Tiki birds all belong-a now.

Jose: I wonder what happened to Rosita.

Zazu: Oh dear. I’m afraid I’m not familiar enough with this type of music to … get down and get funky.

Come on birdies, shake your feathers, do the conga.
No, we can’t control ourselves any longer.
Get into the Tiki rhythm of a song-a.
Don’t you fight it ’til you’ve tried it. Now the Tikis tweet!

All: To the rhythm of the beat.

Pierre: Miss Uh-oa saved our show-a when she turned up the heat.

Lady Birds: She turned up the heat.

Zazu: My friend Iago learned his lesson, and now he will be discreet.

Iago: OH YEAH!? That’s what you think! Time is money. Everybody, on your feet!Michael

All: Click the dot to hear Get On Your FeetGet on your feet!

Michael: And now, as long as you’re all standin’ …

Jose: We have a wonderful magic trick for you.

Fritz: Ja. Everybody! Face the door, und the trick is, ve’re gonna make you all … disappear.

Iago: Ha ha! Now you birds are gettin’ the idea.

Get on your feet.
It’s out the door
You go-ha.

Iago: Come on! Everybody out! Migrate, people! Migrate! Burned Iago

Click the dot to hear Heigh-HoHeigh ho
Heigh ho.
It’s out the door you go.
We hope you’ve all enjoyed the show,
Heigh ho, heigh ho.

Iago: Come on! Keep movin’! You’ve had enough enchantment for one day.

Iago: Hey lady, it wouldn’t hurt you to walk a little faster! ………. Boy, I’m tired! I think I’ll head over to the Hall of Presidents and take a nap.

Zazu: Right! Off you go.

Jose: No one laid an egg but me.