I am always looking for ways to get a Disney fix, and after hearing on Lou’s newscast (which goes live every Wednesday night at 7:30pm)  that there would be an event offered to the general public for a D23 Fanniversary in Boston, I HAD to get a ticket! I was able to get to the 5pm show (there was also one at 2pm which was sold out to D23 members who were able to purchase tickets earlier than non-members)! The tickets were $35 a head for the general public, a price I struggled with accepting, but ultimately realized it was well worth it, and you will see why…

With ticket in-hand, we started the 1-hour drive to Boston, giddy as can be. Kevin and I went with my parents, and the whole drive up my mom kept asking if we were excited, then when we said “YES!” she would say, “No you aren’t, because I’m more excited!” My parents are big Disney fans, too, so I guess it runs in the family.

On with the event!

We arrived a bit early, which was fine. The event was being held in a theater at a”fancy” hotel, the Revere Hotel. I didn’t really know what to expect, but assumed there would be a lot of booths and places to buy merchandise, like an Expo, but there wasn’t anything except a waiting room. We walked in and reassuringly saw a Disney banner with Genie letting us

know we were in the right place. Two friendly and cheery cast members welcomed us and gave us our pins, a flip book with 2 scenes from Frankenweenie (one of my favorite movies), and 2 movie art promo books, called “For Your Considerations” for Brave and Wreck it Ralph! Already, I thought, “I would pay more than $35 for all of this, even without the rest of the night’s event!”

The cast members really made me feel like I was in WDW. I wish I would have gotten a picture with them or asked them what they usually do for Disney, but I was way too excited for the event to start! I was quite surprised and extremely happy to hear a familiar voice call out my name! It was Betty and Dave from The Box! You may know them from their screen names: DaveBell and

BettyMercier. I met them in person at the WDWRadio Dream Cruise 2.0 this past November and it was so great to see them again! That’s what I love so much about this community, we are all already friends, whether we’ve met yet, or not!

We entered the theater when it was time, and the second unexpected thing was realized: there were a lot less people than I expected! I saw that the event was sold out online before we left, but the theater was small and intimate. It was a plus, in my opinion. Yes, it would have been nice if more people could have the opportunity to buy tickets, but having fewer people there made me feel more special. It was as if the show was just for me, and I would be learning this secret information that no one else knew yet!

The show was introduced and we were reminded that we couldn’t take any photos, videos, or audio recordings once it started. Our show hosts then came out: Billy Stanek, D23.com editor, and Justin Arthur, Archives Collections Specialist at The Walt Disney Studios. They started out the show with a shout-out from anyone who tweeted that they would be at the show. I was 1 of the 3 people they shouted out to, of course, and I embarrassingly said “Woo!” when they called my name. And as with the beginning of all Disney attractions, an announcement came over the loud speaker telling us the theater would be moving backwards (into Disney history) and made a joke about pin lanyards.

Throughout the show, Billy and Justin went back and forth introducing different anniversaries, working from 1923, the start of the Walt Disney Company which is at it’s 90th Anniversary this year, all the way to the start of Animal Kingdom, Disney Cruise Line, and Mulan, from 1998, making this year their 15th Anniversary! Between each introduction from this duo, we saw pictures, audio clips, and film from what they were talking about. Most of it was footage rarely seen or heard!

Here are some notable points and facts from the presentation:

Highlights of the show (for me, anyway):

If there are still tickets available to an upcoming D23 Fanniversary in your city, you MUST go! You’ll be happy you did!

Angie has been a WDW addict since her first visit at age 8, and since then her life has never been the same! She lives in southeastern MA with her boyfriend, Kevin (fellow Disney lover), and their 3 dogs, Flip, Josie, and Hildy, where she is currently training to become a professional dog trainer.  Please join Angie every week in “Fish Are Friends, Not Food: Eating Vegan in WDW!” Angie believes that WDW is the most magical place for people with special diets, so, should you have any special diet questions (especially about vegan and gluten-free dining) she’d be happy to help! Angie is also an artist, and you can see her work at www.angiecarreiro.com! 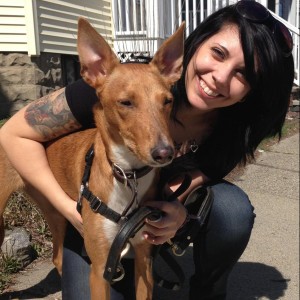