Running for Charity at the runDisney Races

I love a deadline. I have always functioned well under pressure and choosing to run at Walt Disney World for Team in Training (TNT), the Leukemia and Lymphoma Society, was no exception.

The high energy of planning and anticipation fuels me.

And in the case of my first TNT event in 2012, it gave me focus and pause in a time of great uncertainty. This goal of finishing also held great personal weight.

I ran the half marathon to honor my father, Dr. Calvin Fuhrmann.

In 2008, my father was diagnosed with Chronic Lymphocytic Leukemia. At the time, his blood counts were good, and as a family, we engaged in what was called “watchful waiting.” It was in the late summer of 2012 that the mindfulness about the disease, turned from waiting to engagement. He was hospitalized for 2 weeks with a severe case of pneumonia, exacerbated by the spread of his cancer. His oncologist recommended chemotherapy to begin immediately. His treatment and healing necessitated the closure of his medical practice.

My father asked me to help him with this transition. It was a difficult for him, as patient care is my father’s passion.

My father was a runner. He was the only dad I knew who regularly ran 12 miles to and from work to train for the New York and Boston Marathons.

It seemed an easy fit to choose to run to honor him, even though I had never raced (or exercised in years for that matter). I had seen the runDisney marathons in action, and on the same weekend as my father’s first hospitalization, I received a postcard mailer from the Leukemia and Lymphoma Society’s Team in Training, advertising the upcoming Walt Disney World Marathon Weekend.

It was the right time.

Since my father’s diagnosis, I have seen firsthand the impact that he has had on the lives in our community, I hear these words often, “Your father saved my life.” and “He is the best doctor I have ever had.”

I knew that the Leukemia and Lymphoma Society’s Team in Training (TNT) was directly responsible for the time that I had with my father. Just 10 years ago, his diagnosis would have been met with a different prognosis.

The road to that Walt Disney World Half-Marathon was long. As I mentioned: I WAS NOT A RUNNER. I had only a conceptual idea what 13.1 miles meant. TNT paired me with a coach and mentor who were both blood cancer survivors. I quickly realized what it meant to get out on the road and run 2, then 5, then 8 miles, topping out with weekly runs of 12 each miles to prepare my body for race day.

Our team from New England consisted of many seasoned runners and cancer survivors, as well as many first-timers. I was nervous and kept relying on the messages told to me over and over again by my coaches and family: “I was prepared, I was ready, I was on fire.”

Race day at Walt Disney World was the happiest I have ever been to get up at [3:30] AM.

I would soon find out that hundreds of blood cancer survivors, decked out in the signature colors of purple and white would be screaming and cheering for me as I wound my way through the course in the Disney Parks. I had written my father’s nickname on my jersey and would hear the fans cheer: “Do it for Poppy!” and “Poppy’s counting on you!”

My dad could not come physically to that race due to his chemotherapy treatment. He was there however in spirit and that powered me to the finish.

Fast forward six years and what was a team of one has now blossomed to a fully fledged TNT team here in Maine Called the DOWNEAST DIVAS. We have members who have participated in events across the country, including 7 runDisney race weekend events. In 2018, Team in Training celebrated its 30th Anniversary at the runDisney Walt Disney World Marathon Weekend‘s 25th Anniversary. We had a 500 member team from across the nation running over the weekend to honor patients, survivors and loved-ones who have passed on.

runDisney has also connected me with a community of like-minded runners and philanthropists who are fueled by both a love of Disney and their need to give back.

One such amazing person is writer, photographer and cookbook author, Tiffany Dahle.

Tiffany runs on the St. Jude’s team during the Disney Princess Half Marathon Weekend:

“I have been a huge fan of St. Jude since my college days. As a member of TriDelta, our annual philanthropy efforts supported St. Jude Children’s Research Hospital. In 2014, I decided I wanted to run my very first runDisney Princess 10K, but I was too scared to do it alone. My sweet husband and our awesome friends Paul and Erica said they would run it with me for support. As newbies, we had no idea how fast the bibs would disappear on registration day! That was when I first discovered that you could run for charity. One glance at the list of charities participating,   and I knew immediately I wanted to run for St. Jude.”

“We fundraised for our team over the next 8 months, and in that time, I was honored to be invited to visit the St. Jude campus in Memphis, TN. The tour of their amazing facility was life changing. No place on earth is as filled with hope as St. Jude’s. Their team is on a mission to end childhood cancer, and they won’t stop until no child dies from cancer. Since that first year, I’ve run every February for St. Jude. My team changes from year to year, but as a whole group, I’m  thrilled to share we’ve raised over $15,000 for their phenomenal work. I can’t imagine running Disney any other way,” say Dahle.

Something magical happens when you run for charity in the “Most Magical Place on Earth.” You are lifted up in the face of challenges, and you are supported every step of the way. ( I must admit: Celebrating in the parks after a day of racing is the sweetest reward for the hard work of training and fundraising.) Interested in running for charity with runDisney? You can find a full list of the various charities that Disney supports for each of its races at rundisney.com.

Have you run for charity at Walt Disney World? How did you like it? We would love to hear from you.

(Photos from the personal collections of the author and Tiffany Dahle.)

To learn more about Kristin and read her recent posts for WDW Radio, visit her author page by clicking the link on her name at the top of this post. 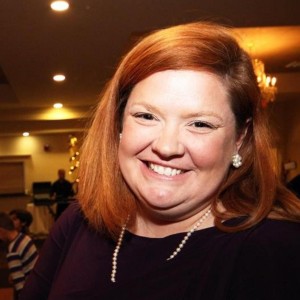