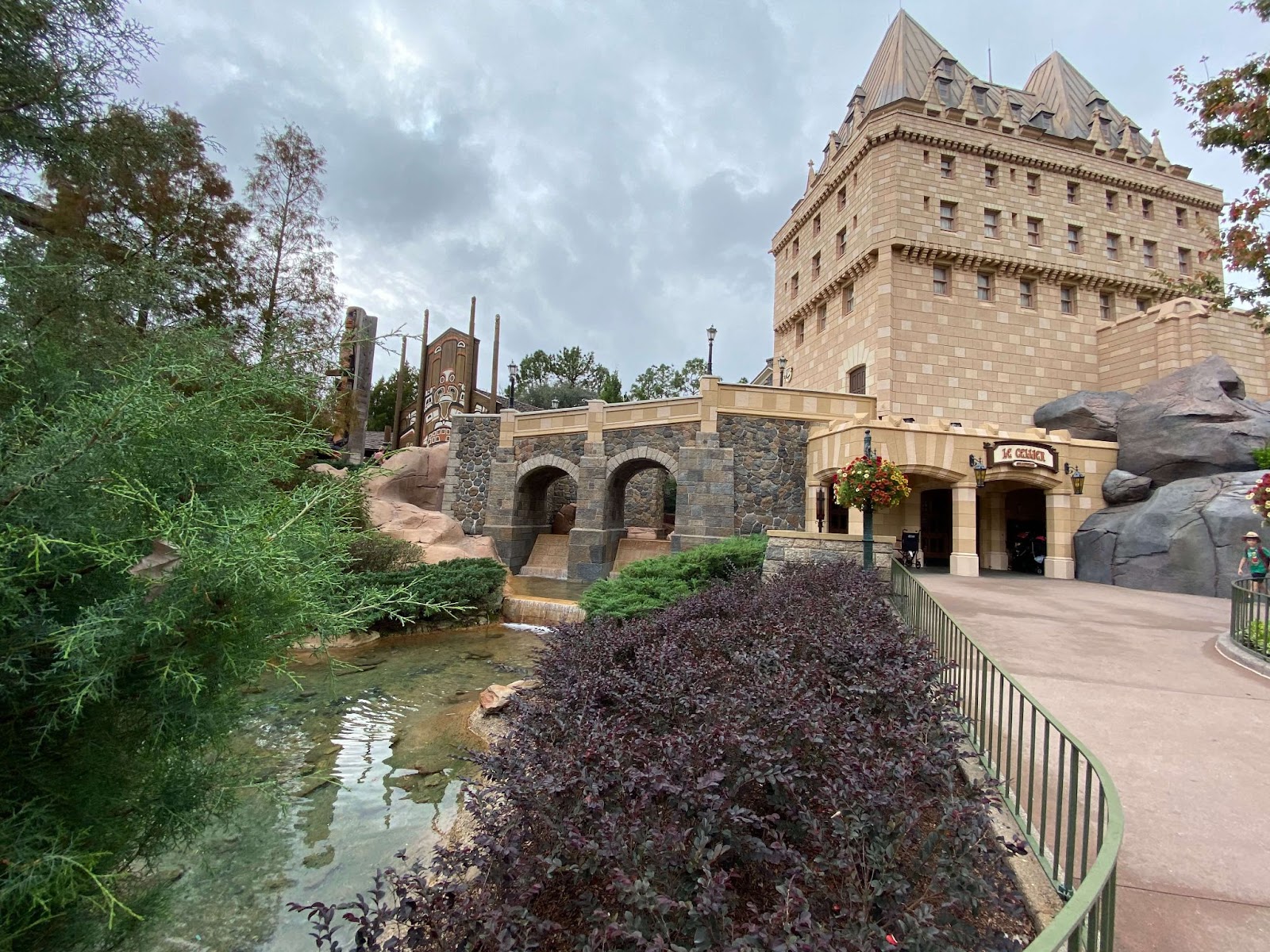 I am so excited for soup season, and really excited you all voted for the Canadian Cheddar Cheese Soup from Le Cellier’s Steakhouse because it is one of my favorites. When EPCOT opened in 1982, Le Cellier opened as well. It was a little different though, originally operating as a cafeteria quick service restaurant that served Canadian specialties like salmon and maple syrup dishes.

In 1995, the first renovation took place, but it didn’t last long since Le Cellier became a sit-down steakhouse in 1997. The building itself is designed with the classic forced perspective like many other buildings in Walt Disney World. From below it looks as if it is six stories high, but in reality, it is only three. 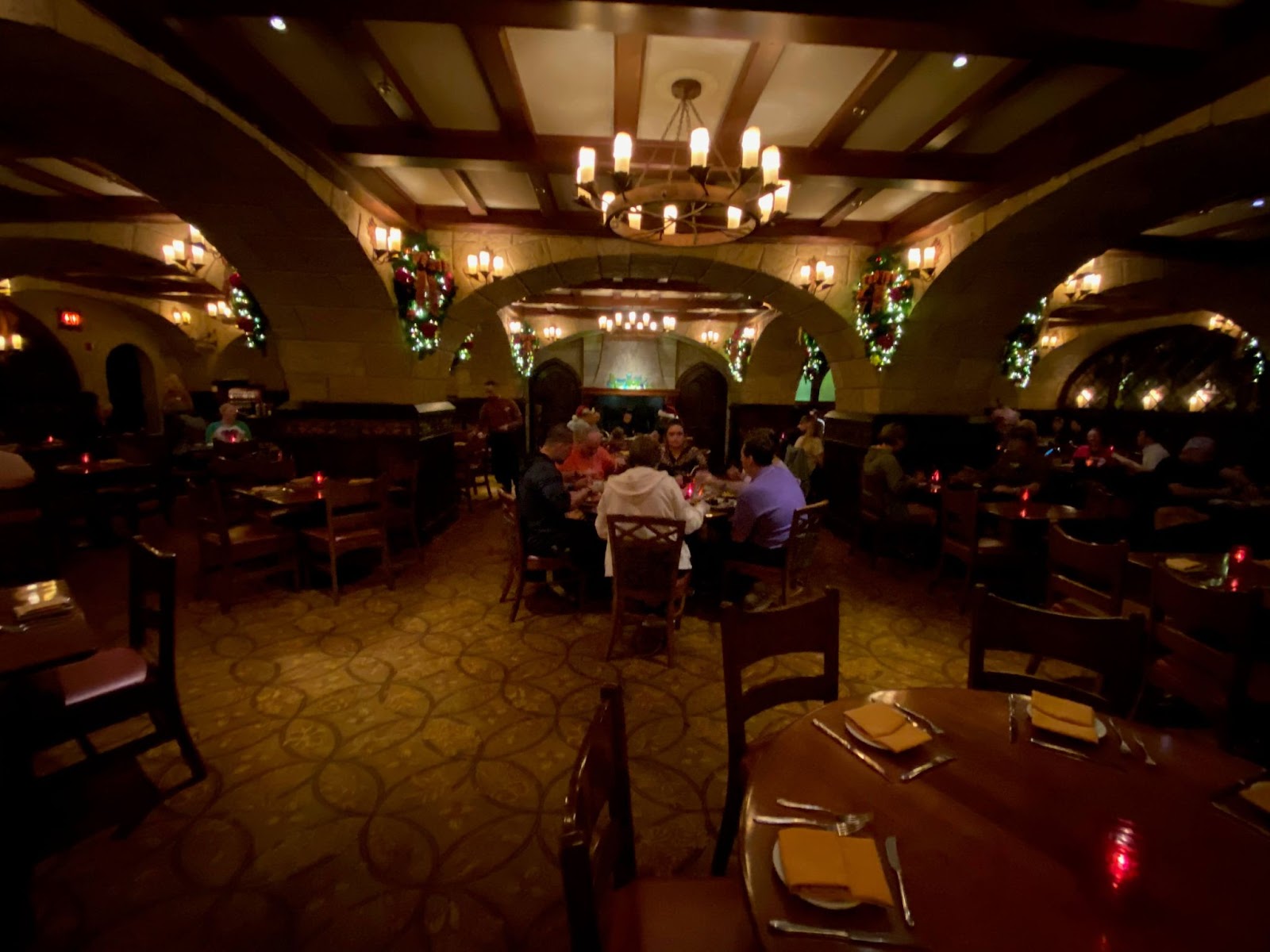 Le Cellier means “the cellar” in English and the interior is designed to look like a wine cellar. Image from personal collection, 2019

The Imagineers modeled the building after Chateau Laurier in Ottawa, Ontario. And that is where I went down a rabbit hole… so much great history from the building to the people. Ok, here are my favorite interesting facts:

-The Chateau Laurier was one of many great hotels built along the railway as it expanded westward across Canada. The Grand Trunk Railway Company led by Charles Melville Hays commissioned the hotel at the same time as their union station as a place for travelers to stay.

-The French Gothic Revival Chateau style hotel was first designed by Bradford Gilbert. Those designs were turned down and he was dismissed, so Ross and Macfarlane finished the design that was remarkably similar. Gilbert later sued and was given $20,000 in an out-of-court settlement. So those designs must have been quite similar. So why wasn’t it named after Hays? Instead it was named after the Prime Minister of Canada at the time, Sir Wilfrid Laurier, because he helped secure the land along the banks of the Ottawa River.

-Construction took from 1909-1912 which incorporated Indiana limestone and Tiffany glass windows with a copper roof on the exterior and Belgian marble in the lobby floor. The opening celebrations were set for April 1912, but, …wait for it… Charles Melville Hays perished in the sinking of the RMS Titanic. I know, I get too excited when there are connections like this. I told you, I’m a history geek, I love this stuff. He was traveling back for the opening from London with his wife, daughter, son-in-law, secretary, and a maid. It was said that he helped the women in his party onto one of the lifeboats and they survived. But he along with his son-in-law and secretary went down with the ship along with over 1,500 others. His body was recovered and is buried in Montreal. There were also some furnishings he purchased for the hotel that were lost to the sea as well.

-The opening finally happened in June 1912. The hotel is still in operation today and in 1981 was listed as a National Historic Site of Canada. 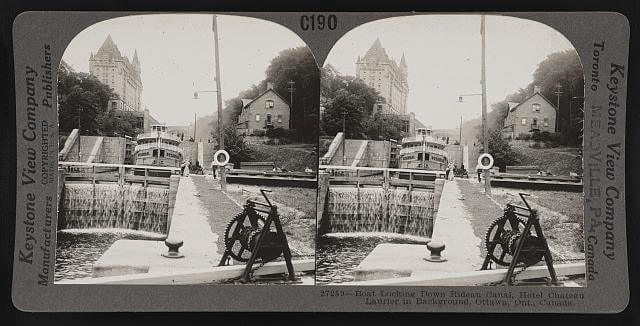 Stereo image of the Chateau Laurier up the hill from the boat dock, 1923. Image from Library of Congress LC-DIG-stereo-1s18391

There is always so much more to learn, but let’s get on with the food. I am using the recipe for the soup from the “Delicious Disney” cookbook. 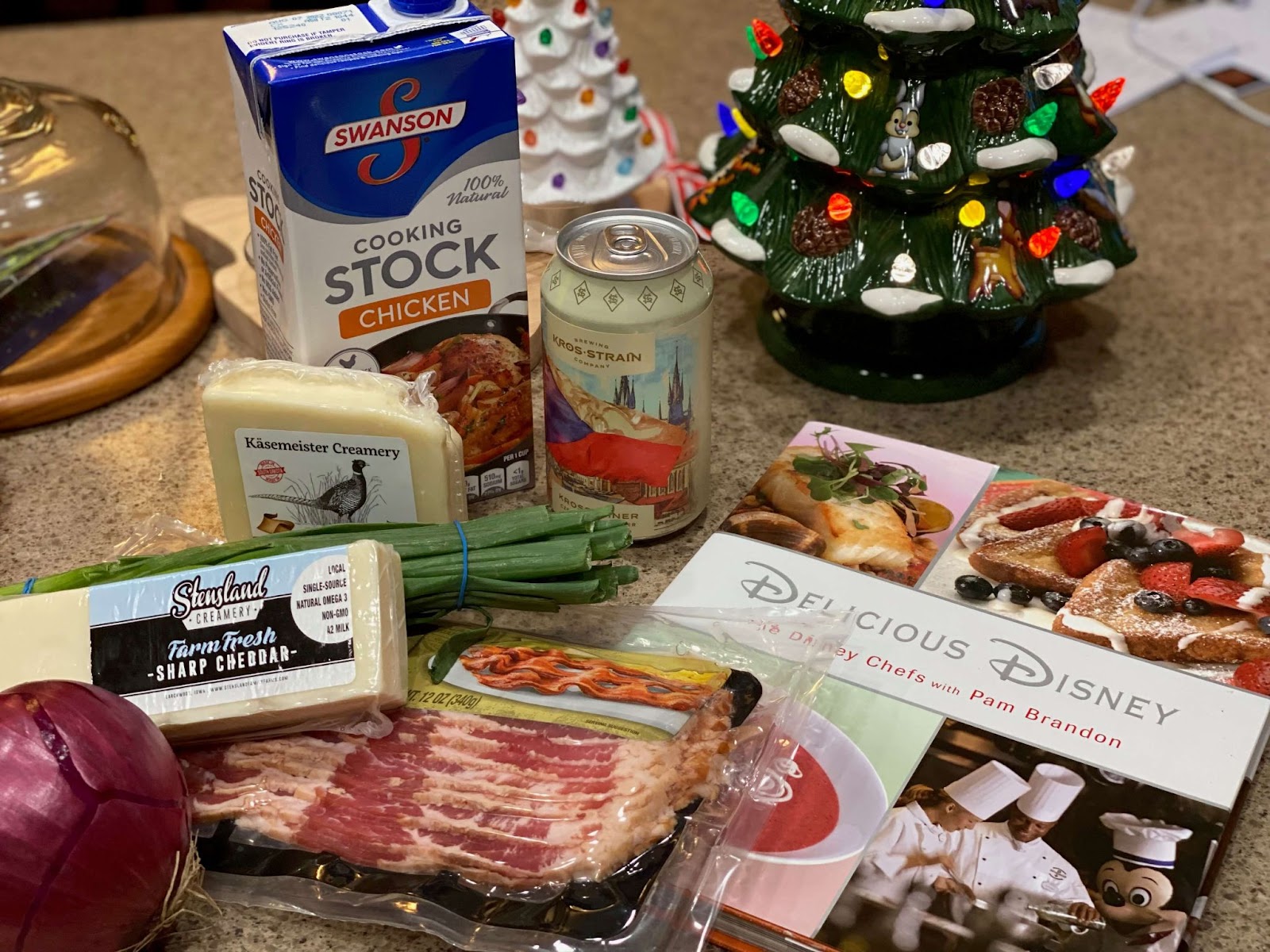 Like all recipes, the quality of the ingredients can affect the end product. Here in South Dakota, I could not find the Moosehead Pale Ale that Le Cellier uses. But we are so close! I could find the lager but not the Pale Ale, so I found a local beer which is a Czech-Style Pilsner that still has a bit of hoppy taste to it. Other times I have tried Boulevard Pale Ale, which is my favorite so far, and the Sierra-Nevada Pale Ale, which is also good. I’ll keep testing new ones to find the taste I like the best. Also, I found two different local white cheddar cheeses to use and I really liked mixing it up. 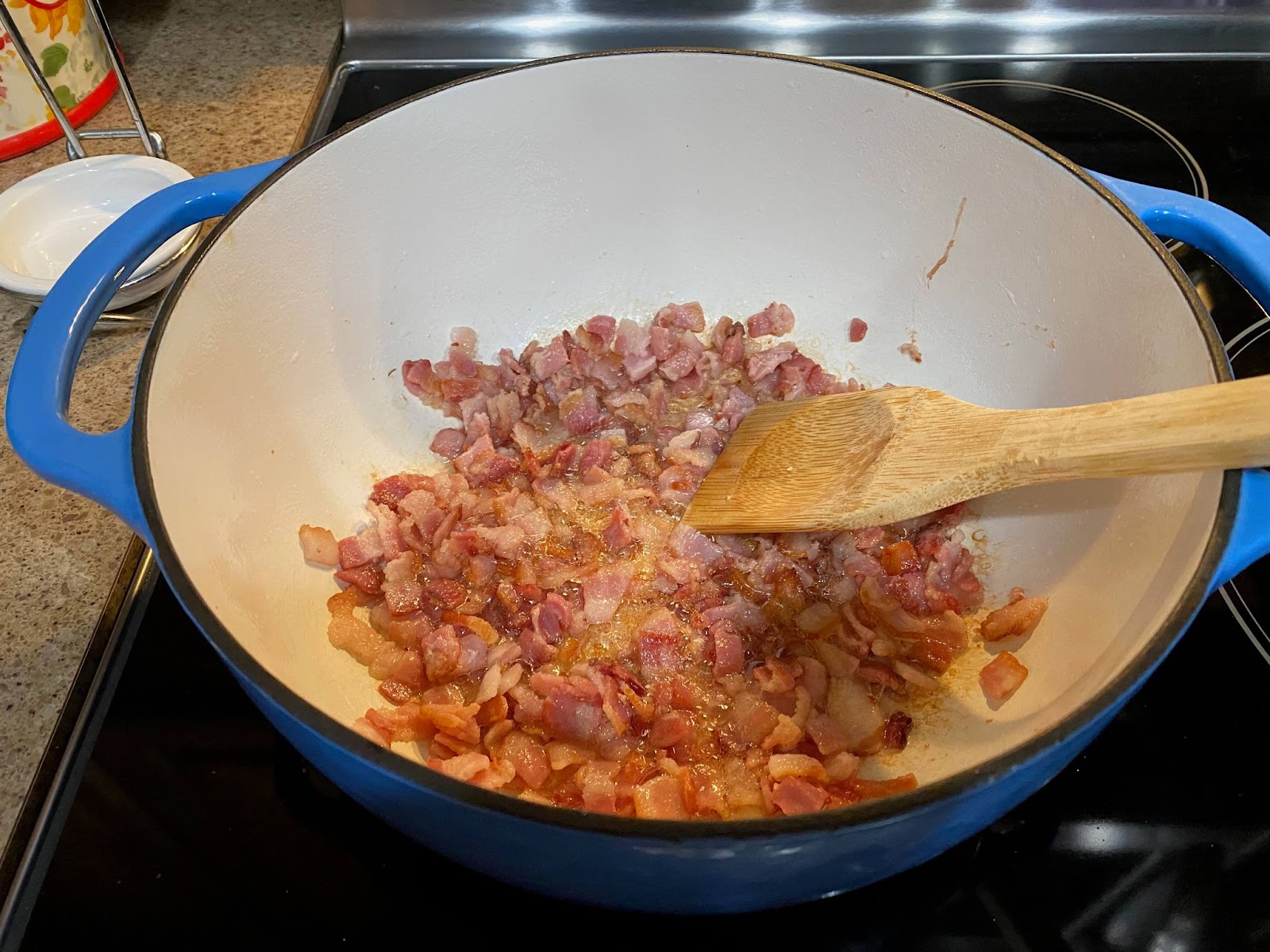 First, I used Apple-Smoked bacon and cooked it really well so it was almost dark brown. (That is if you like crispy bacon like I do.) Then I added the celery and onion and cooked it until the onion was soft. When cutting the onion and celery, it’s up to you what size but I wouldn’t go much bigger than a half inch. 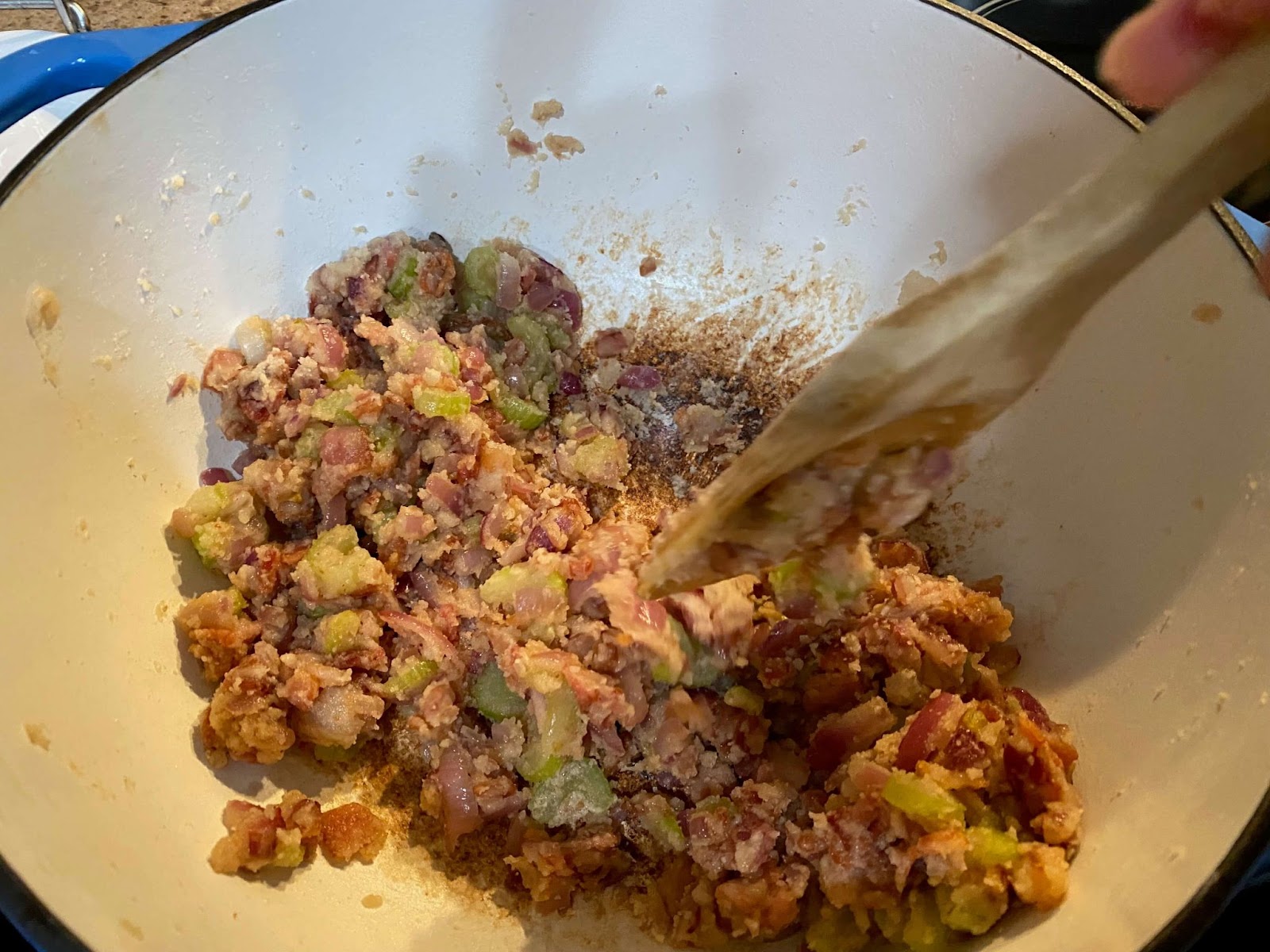 Adding the flour is the start of a roux so you want to cook on medium or medium-low depending on your stove top. The four minutes does seem very long, but you need to cook out the flour taste. When you whisk in the chicken stock it gets thick pretty quick so turn the heat down to medium-low for sure.

The cooking time allows you to watch a Disney cartoon or turn on the football game. Then you add milk and watch another cartoon, or finish the beer leftover from only using a ½ cup of it in the next step. Just don’t let it boil at this point, no one wants to cry over burnt milk. (I think that’s the saying.) 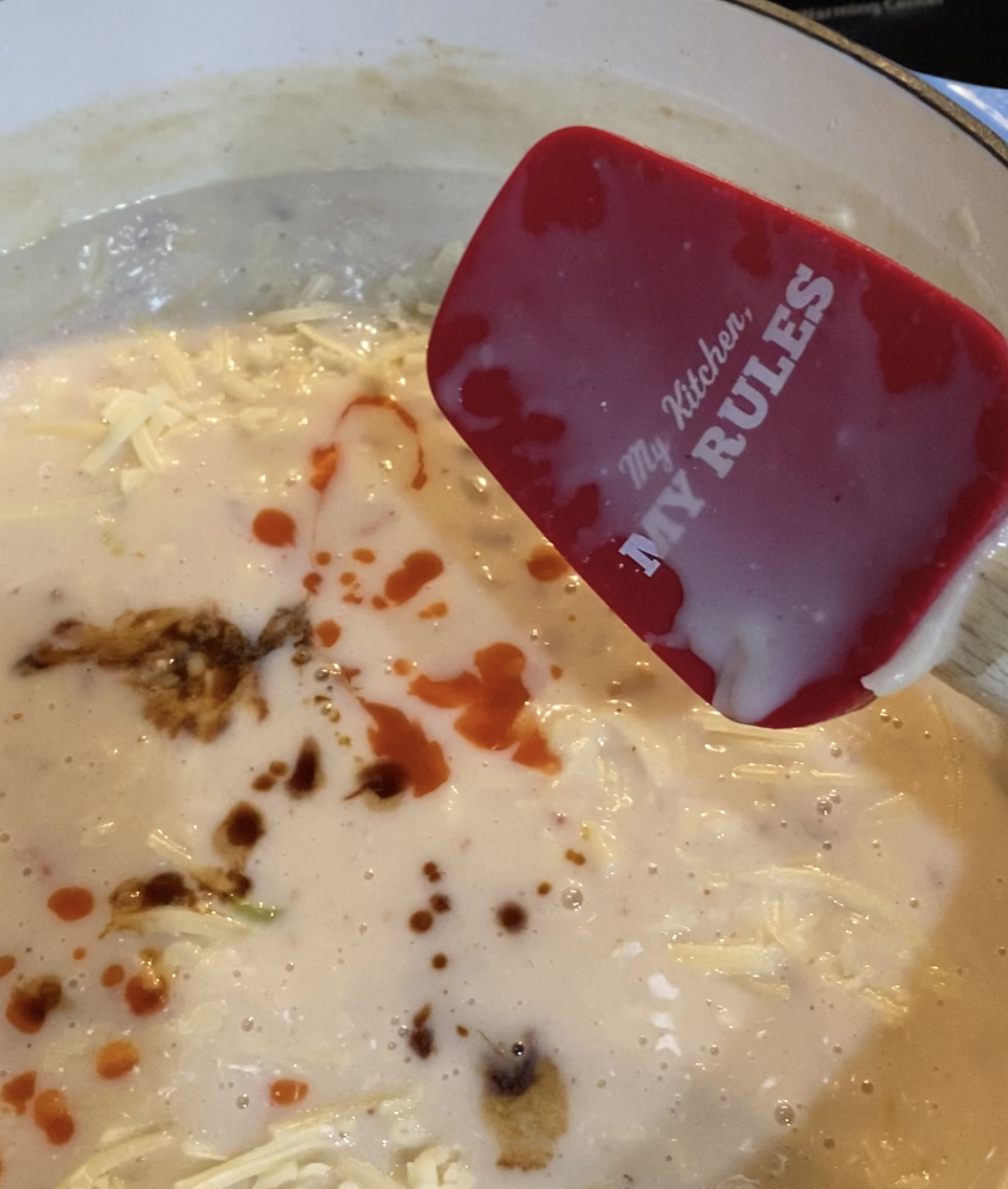 By the time the cooking is finished, the soup is pretty thick. Add the cheese, Worcestersire, Tabasco (I use Red Hot) and, of course, the beer. Add a couple more drops of Red Hot if you want to spice it up a little — not too much to overpower the cheese though. 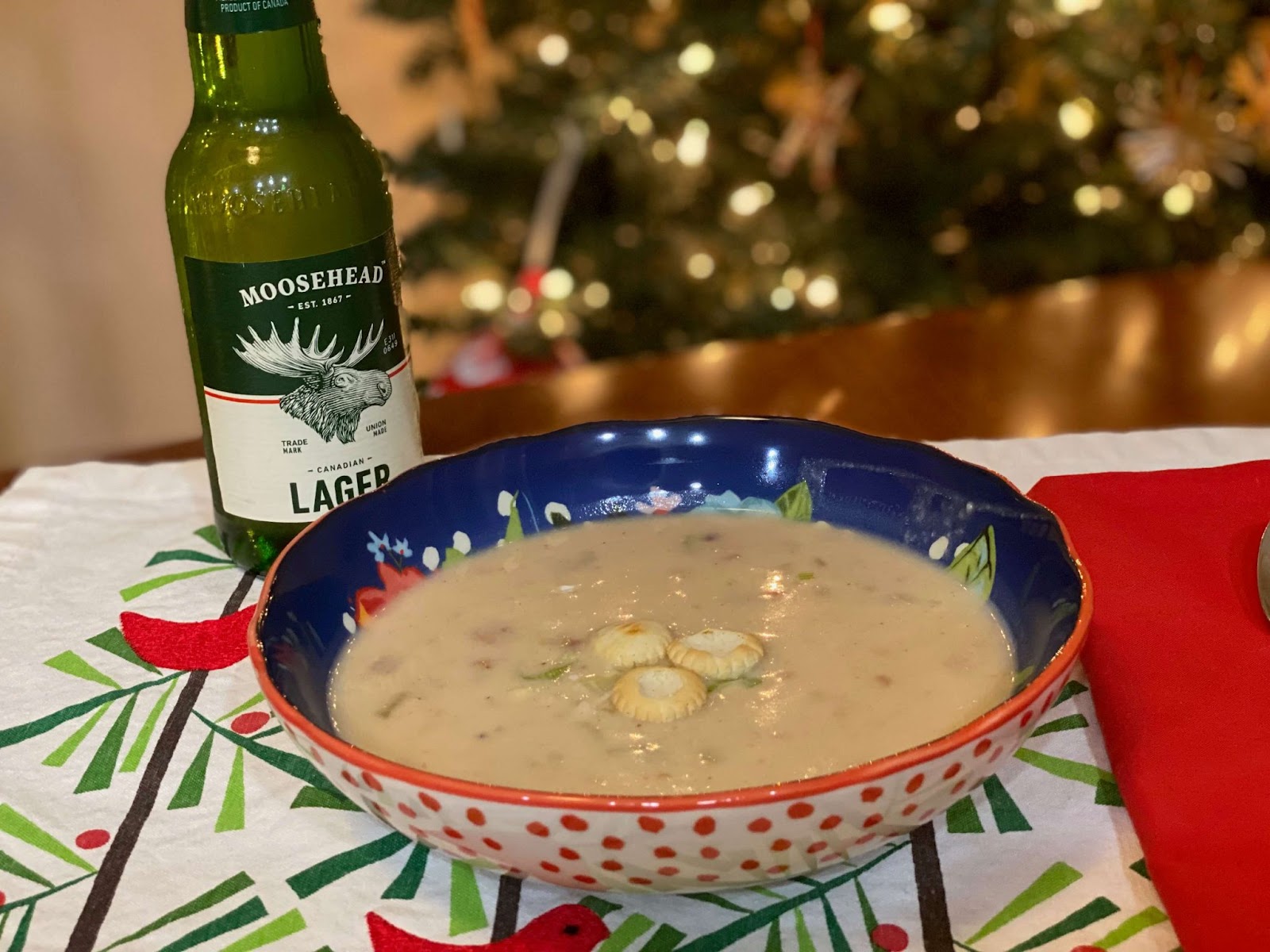 I like to serve it topped with scallions and a few oyster crackers. If you are feeling extra hungry, a good French bread would be great with it too. And of course a merlot, a good ale, or really whatever you like to drink. I’ve even had a pretty dry sauvignon blanc and that paired nicely.

The soup is very rich but so many flavors come through, from the sharpness of the cheddar to a little kick from the Red Hot. Overall, this is one of my favorites to eat in EPCOT and to make at home! 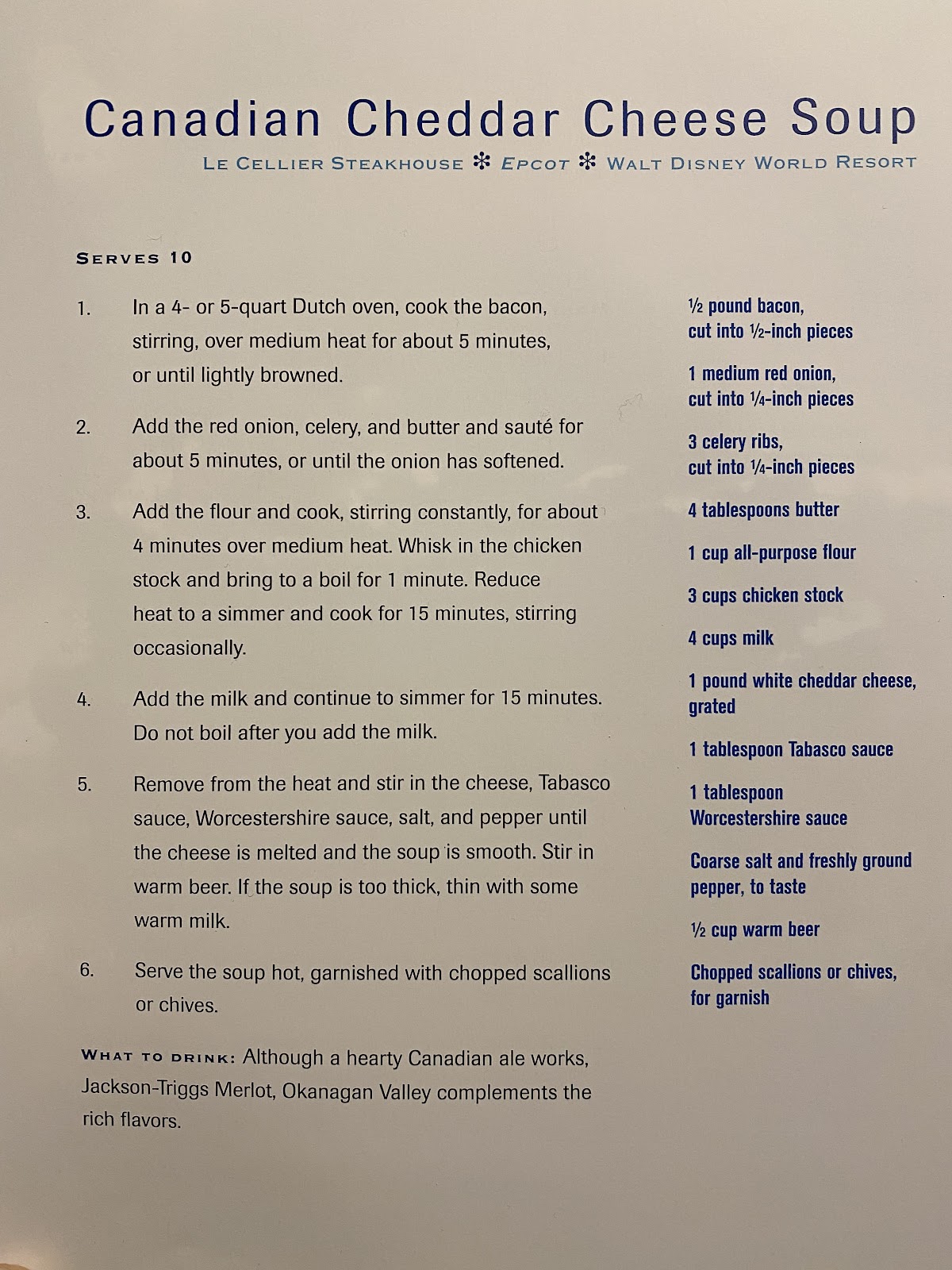 Recipe from “Delicious Disney: The Disney Chefs and Pam Brandon.” This is a must have for Disney Foodies. Go get one!

January is my birthday month so I should make something special. My favorites are steak, seafood, pasta… well, I guess that means food is my favorite! Shoot me some ideas and I’ll see if I can find the recipe and I will post a poll in a few weeks.

Have a great Holiday Season! Here’s to cooking, family, and warm memories!