As we enter a new year, excitement builds for what Walt Disney World has to offer in 2022. In January, RunDisney marathons returned in full force, the 50th celebration continues, and Epcot’s Festival of the Arts kicks off – featuring talent from across the Disney company.

One of my must-dos when visiting the Disney Parks remains exploring the Disney Art Galleries, including the WonderGround Gallery at the Marketplace Co-Op in Disney Springs. Creative interpretations of favorite Disney characters and scenes are presented through giclee prints, postcards, and original paintings by talented artists.

During the Festival of the Arts, guests have the opportunity to not only peruse and purchase paintings and prints, but meet the artists! I’ve had the pleasure of interviewing numerous Festival artists, and I’m excited to share the background and inspiration for their artwork to the WDW Radio Community. 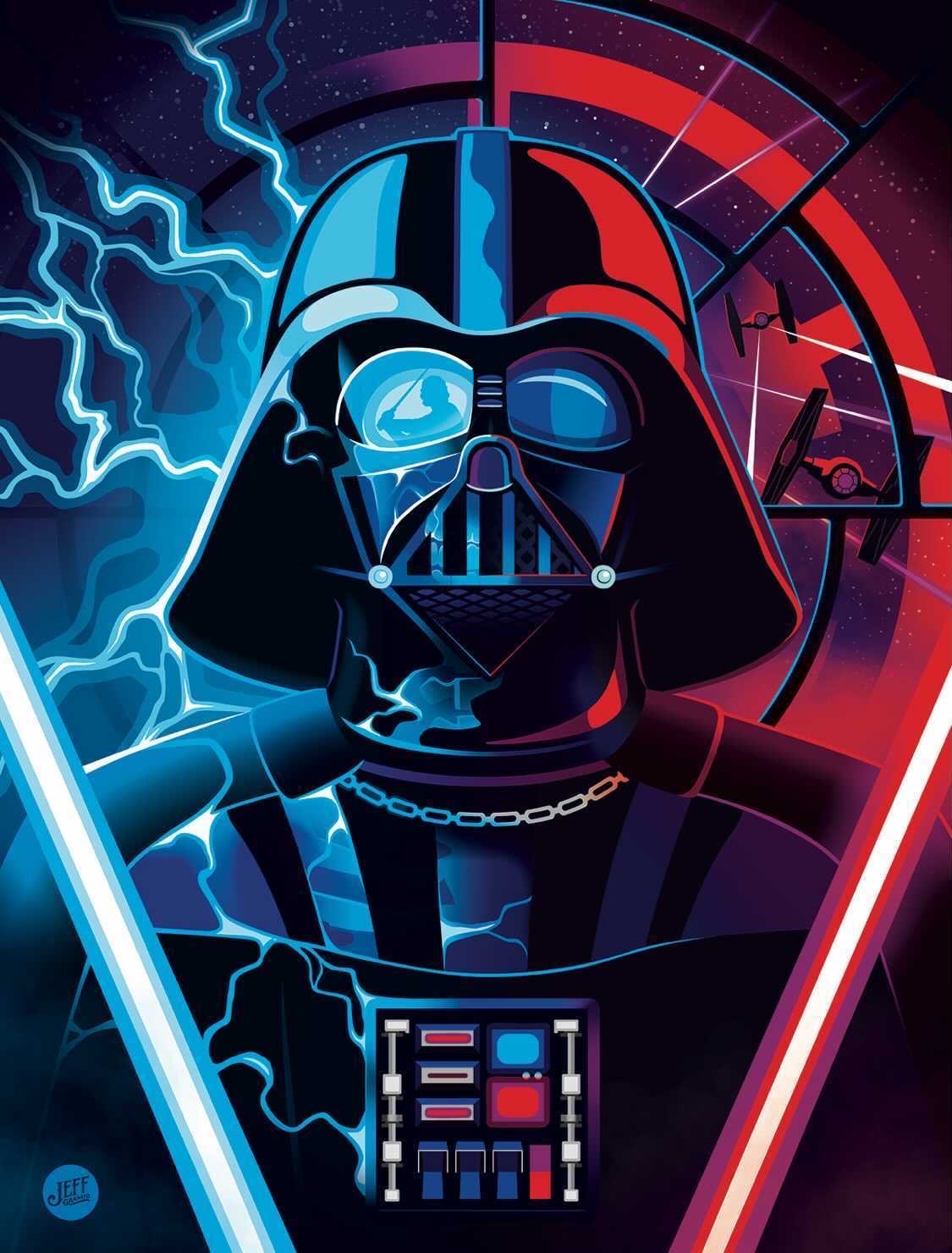 Jeff Granito’s bold, graphic artworks capture the essence of character. In one of four pieces Granito is releasing for Epcot’s 2022 Festival of the Arts, Darth Vader’s masked portrait consumes a composition of tie fighters, blue electrified lines, and two lightsaber blades. Tones of red ominously highlight evil on the right side of this Star Wars-inspired piece, while a seemingly-sizzling blue light balances the left side. The dueling palette of cool blue and warm red expresses the fighting forces of light and dark in the character of Padawan-Anakin-turned-Sith-Lord Darth Vader. Darth’s dark, black features are juxtaposed by the vibrant and sophisticated color palette found in a majority of Granito’s works.

Taking a closer look into each of Granito’s pieces, viewers will unlock more into each artwork’s story. For example, in “Emperor’s Wrath,” a familiar silhouette is hidden in Darth Vader’s eye, further immersing the viewer into the narrative of this painting.

“My inspiration primarily comes from graphics that I grew up seeing – toy packaging, posters, advertisements, lunchboxes, and other mass market merchandise, including a lot of Disney stuff from the parks that I grew up with,” Granito explains. Granito remains inspired by the Disney Parks and relayed that his favorite Disney memories are being with his family as guests in the parks.

Granito’s graphic design education may contribute to the formal elements found in each of his works that make them pop, like the contrast of black shades with saturated colors. Granito said that he went to art school for graphic design but always enjoyed drawing.

“I slowly started to incorporate my own illustrations into my work until it overtook my actual design work,” states Granito.

As a freelance artist, Granito said he’s also learned from “a wide spectrum of clients.” After many years of working freelance, Granito became a part of the WonderGround, including becoming an artist in residence for the California-based gallery. A few years later, Granito joined the WonderGround tent at Epcot’s Festival of the Arts.

Visit Granito for a signing event at the WonderGround tent February 1-7, 2022, and view his work throughout the duration of the Festival and in galleries across Disney property.

Tiera Tanner lives her life spreading pixie dust. Whether creating art in her studio, or raising her two young sons, Tiera is inspired by the magic of Disney, and is always encouraging her husband to plan their next trip to the parks.

Tiera Tanner lives her life spreading pixie dust. Whether creating art in her studio, or raising her three young children, Tiera is inspired by the magic of Disney, and is always encouraging her husband to plan their next trip to the parks.
All Posts by This Author
Facebook-f Twitter Youtube Pinterest Instagram Spotify Apple

Live video from Disney’s Hollywood Studios as we talk about the music from the parks… and maybe snack… and ride!