Happy New Year!!! And welcome to January, my Birthday month! Yes, I celebrate all month. Why not, it’s cold up north and we all need something to get through the winter. Since it is my birthday month I decided to make one of my favorites — steak! I also wanted to find a good side since steak isn’t very exciting to talk about (or so I thought).

I was going through my cookbooks and found a recipe for gratin potatoes from the Yachtsman Steakhouse. So I started researching the Yachtsman in the Yacht and Beach Club Resorts. Not too much history exists since they have only been open since 1990. The resort’s theme is “Summer at the New England seaside just before the turn of the Century” (as Disney describes it). The Yachtsman Steakhouse opened with the resort, with design features that have a nautical influence along with some Arts and Crafts.

Wait a minute, tangent time, let’s go back to the theme, “…New England seaside just before the turn of the century.” Really!? I thought steakhouses were from Texas, and that they haven’t been around that long. It’s a newer concept, right?! That’s where we all go to celebrate a milestone like a promotion, anniversary, or BIRTHDAY! Well, you know me, I had to research this.

What is the origin story of the steakhouse?

Let’s start with chophouses that began in London during the 1600s. These establishments were places men could go for a hot meal while working downtown. They served an individual portion of meat, “chops,” of everything from beef to lamb to pork. In the US, after the Civil War chophouses started to gain in popularity. But these were dark, saloon-like places that were probably not as delightful as the high-end steakhouse we know of today. And you would never find a woman at these places, they weren’t allowed.

Steak started to change a bit too during this time. The Black Angus breed was developed and the meatpacking industry was booming. So yes, the first steakhouses were established in the meatpacking district in New York. These were much nicer establishments than the dusty beer halls and taverns. As the middle class grew, influences from Paris and other locations overseas began to show up in fashion and in foods. These also influenced the steakhouses with the use of sauces and wonderful side dishes. And finally, women and families were allowed to enjoy the experience. Now you can find a steakhouse in almost every city. What’s your favorite? 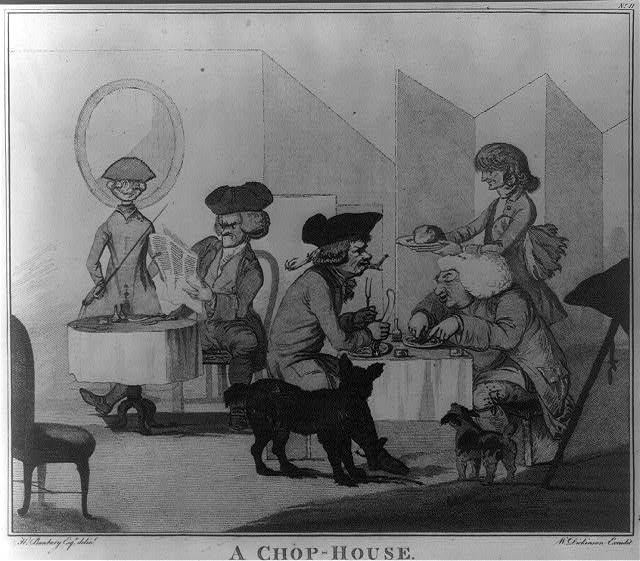 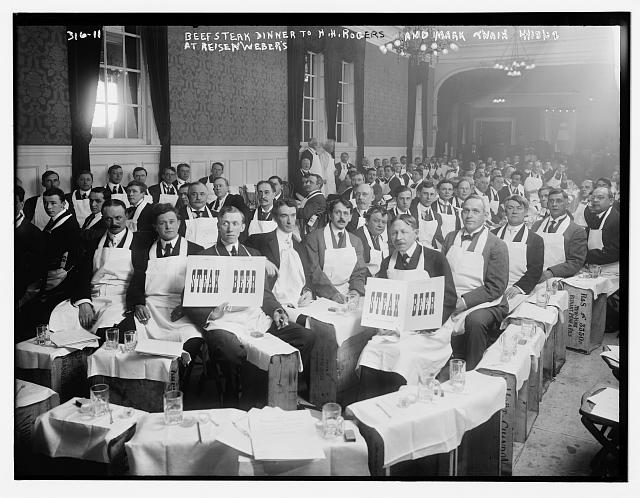 Now that we all know about steakhouses, let’s make a steakhouse meal.

The Yachtsman has a Ribeye with Blue Cheese-Shallot Butter so I figured out a recipe. I added their potato Gruyère gratin and a salad with home-made ranch dressing.

2 tablespoons Crumbled creamy blue cheese ( I just get the stuff in the carton already crumbled.)

2 teaspoons chopped Fresh thyme (Any herb will work. I used thyme because it’s in the potatoes, too.)

I used a fork to meld it all together then used my hands to compact and roll it in wax paper to make a cylinder the size of a roll of quarters. Then I put it back in the fridge for a couple hours to harden up. Oh, and I use vinyl gloves whenever I handle messy food or raw meat for sure. It’s nice to have a box in the kitchen for any of the messy preps. 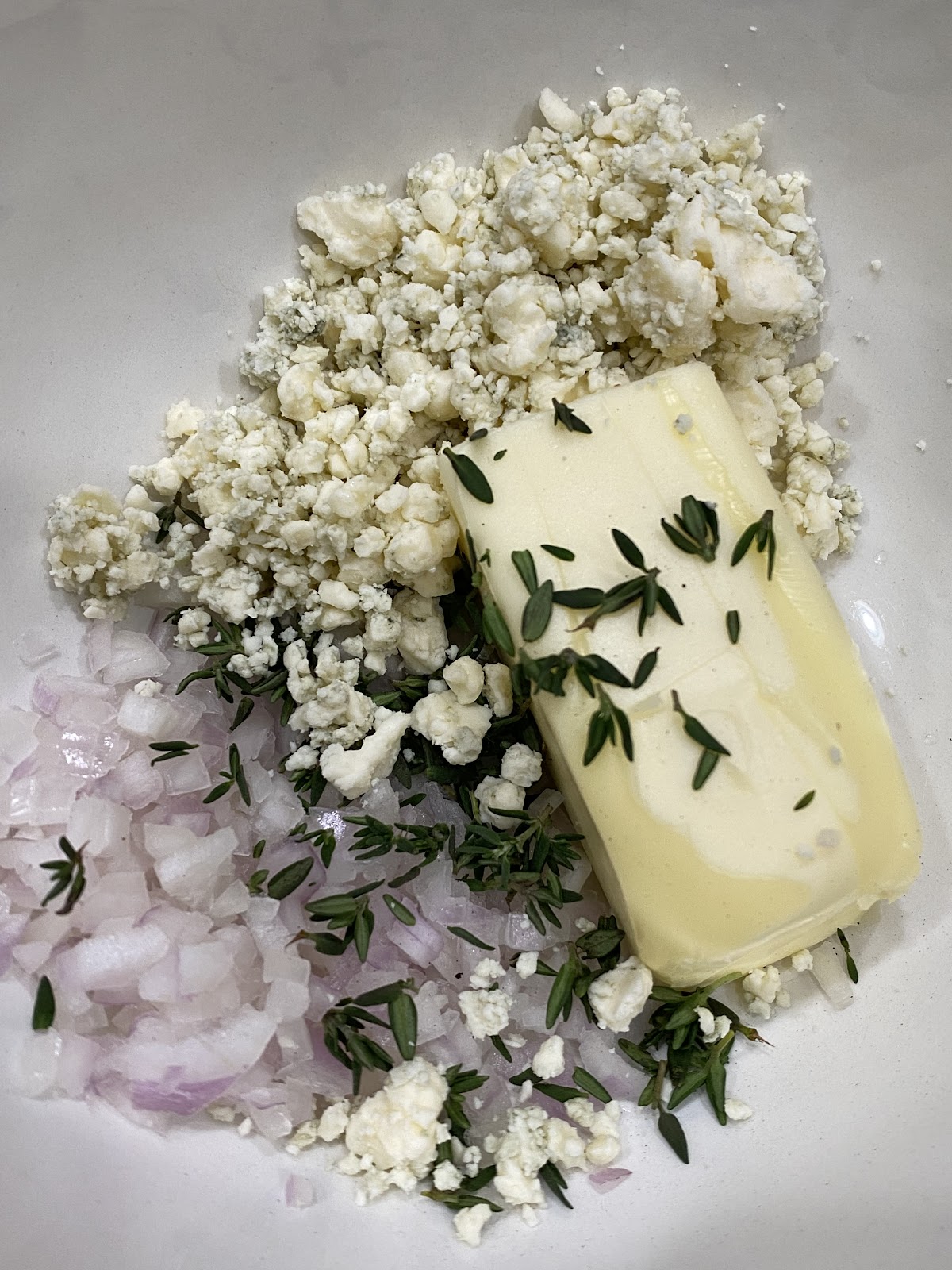 For the potato recipe that started all this, I found it in the “Delicious Disney: The Fresh Edition” cookbook. 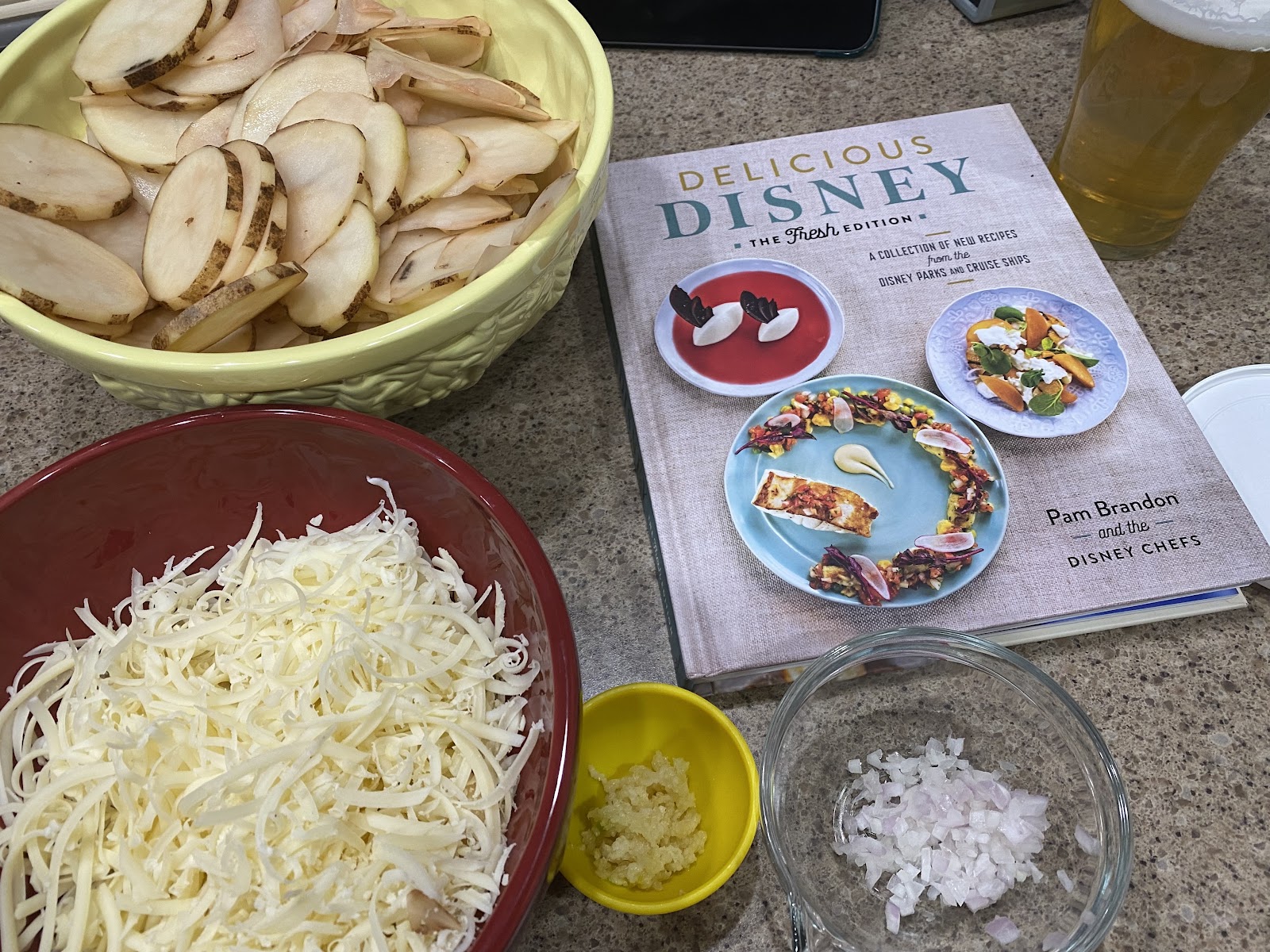 So this recipe is for 6 to 8 and there are only two of us so I cut the amounts in half. And I used a smaller pan. But here is the full recipe:

1 tablespoon Minced garlic (I didn’t cut this one in half because we like garlic.)

Preheat the oven to 375°F and spray a 9×13-inch baking pan with nonstick cooking spray; set aside. In a medium saucepan, heat the oil over medium heat for 3 minutes, then add the garlic and shallots and cook until the onions are translucent, but don’t let the garlic burn. Add thyme and heavy cream. Bring the heavy cream to a simmer over medium heat, then add 1 teaspoon of salt and white pepper and reduce heat to medium low. Simmer until the cream is reduced by half.

This took about 15-20 minutes. While waiting, I prepped the potatoes by using the slicing attachment on my food processor. You can use a mandoline to make them more consistent in size, but I don’t have one and didn’t feel like using a knife to cut them all. 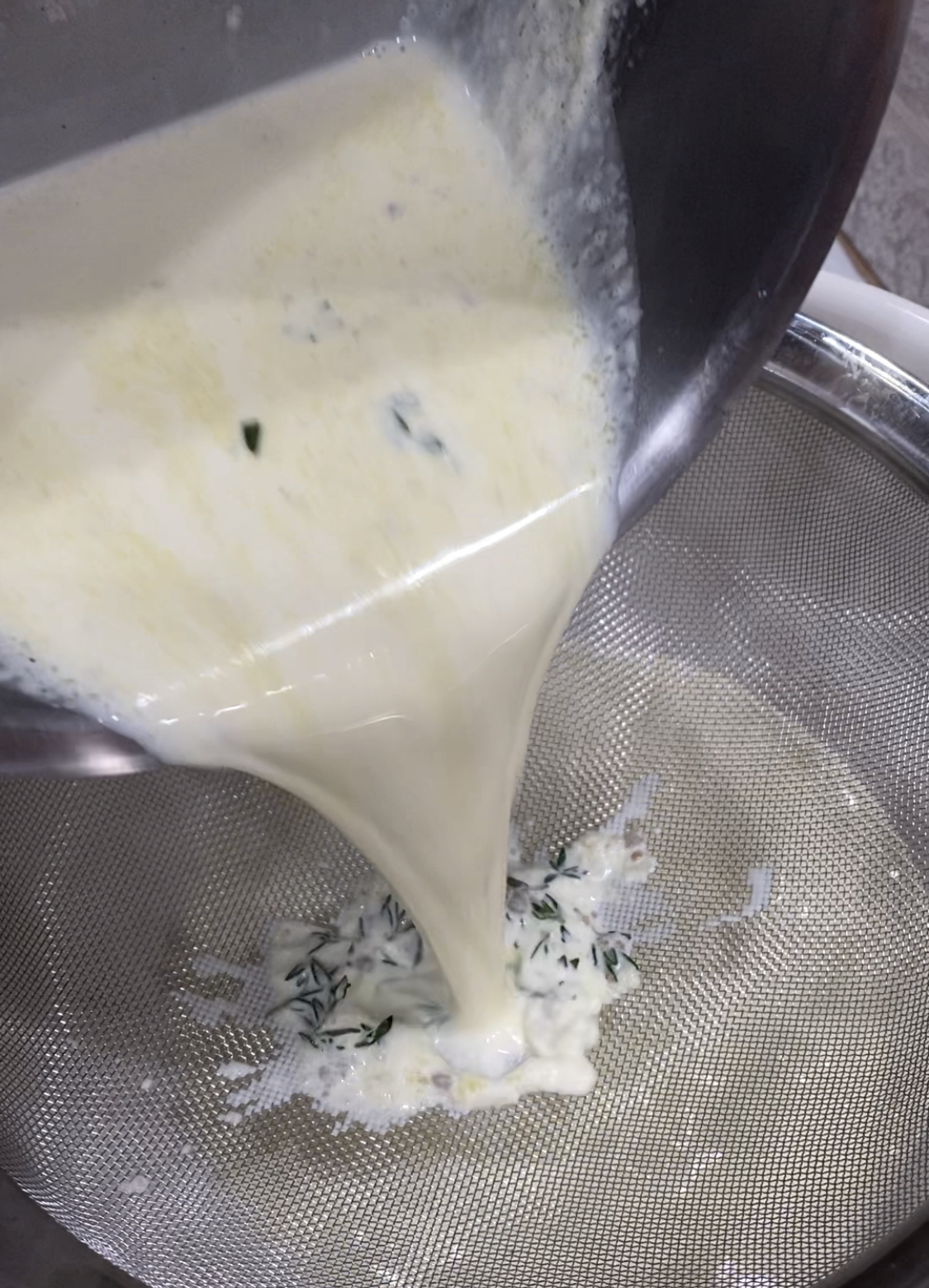 Once the cream is reduced by half, pour into a large bowl and strain garlic, shallots and thyme from cream. 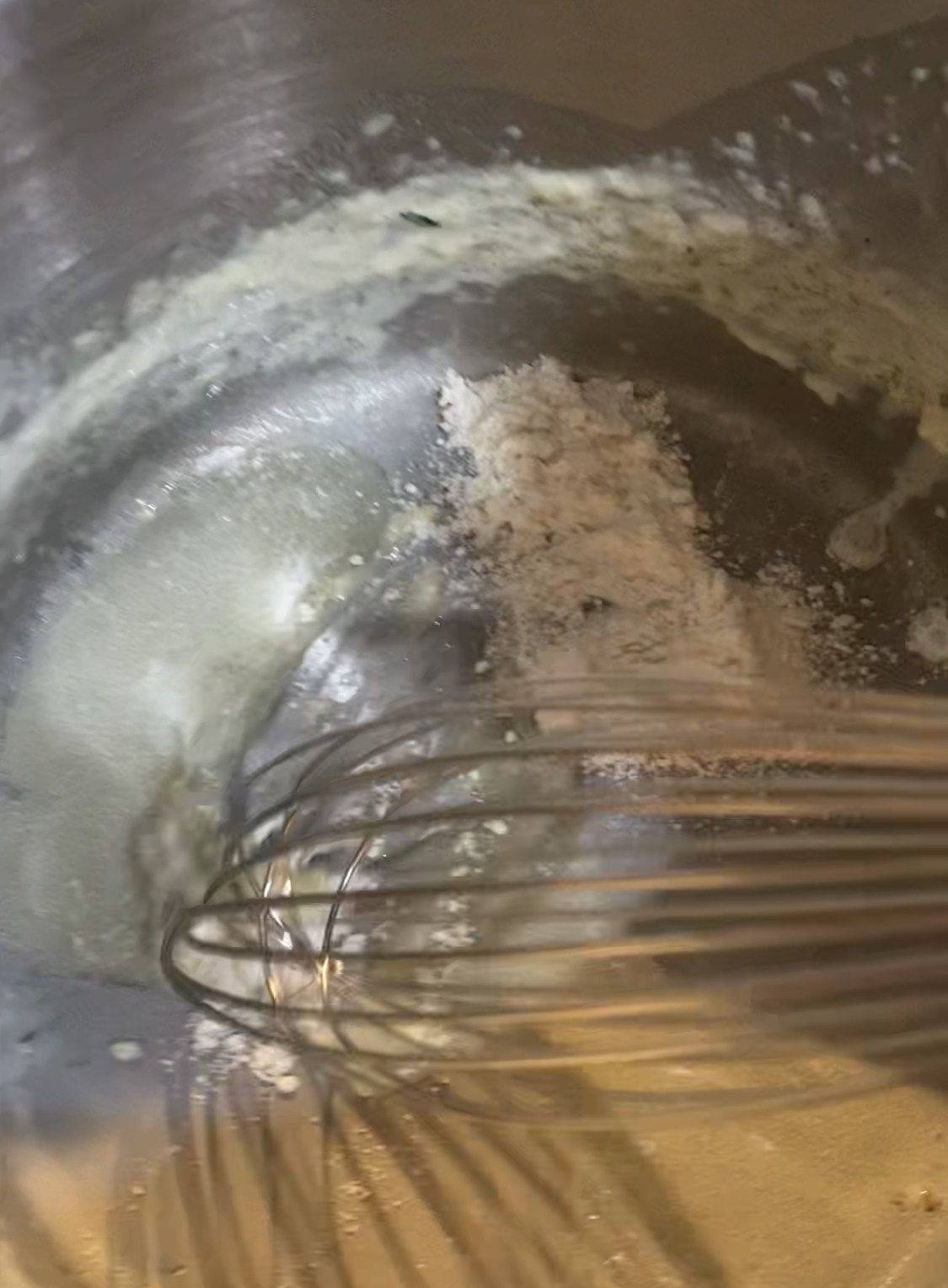 In the same pan we then make the roux by melting butter and whisking the flour in until smooth. 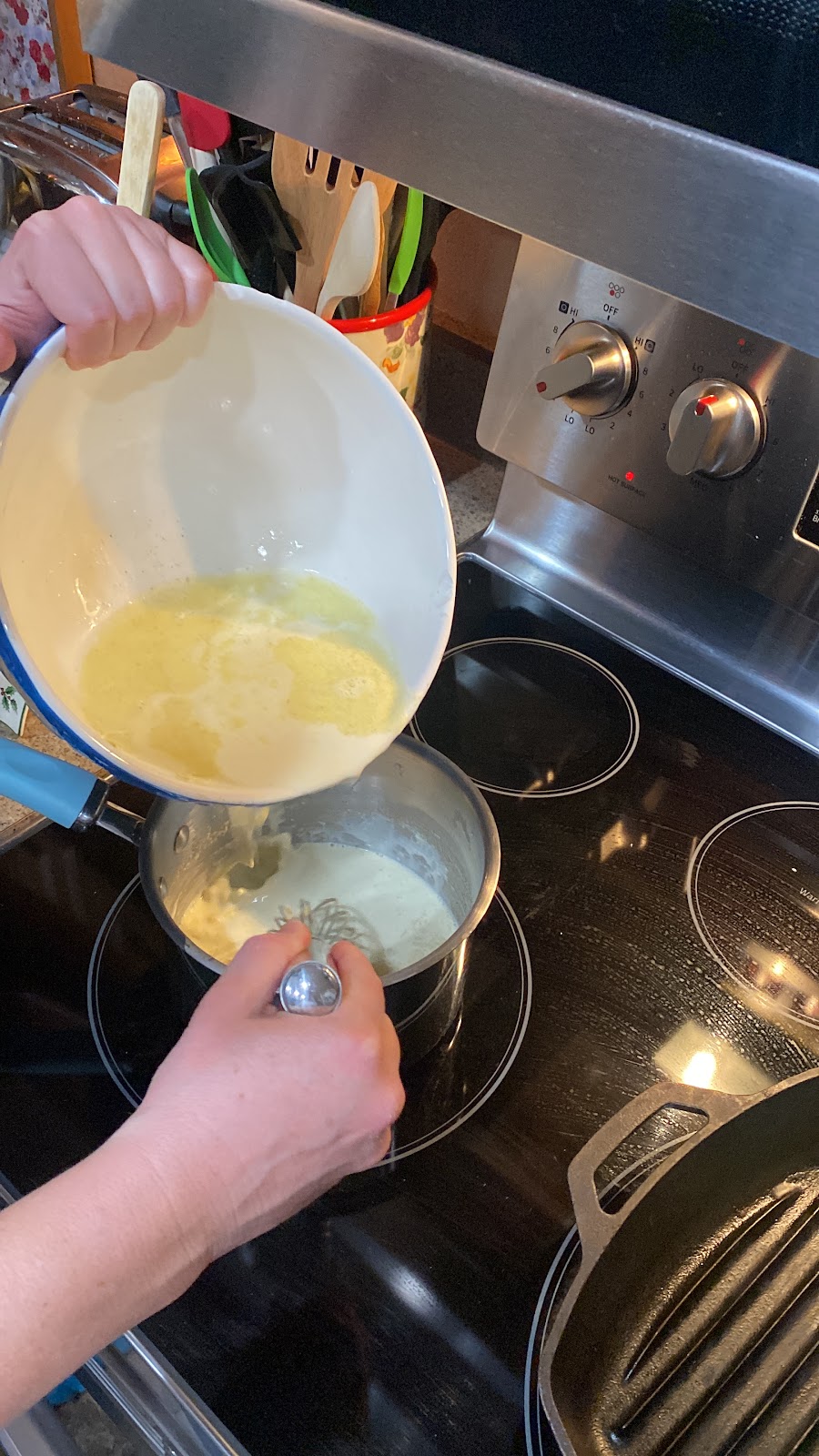 Slowly pour in strained cream and whisk constantly until cream begins to bubble and thicken. Turn off heat. 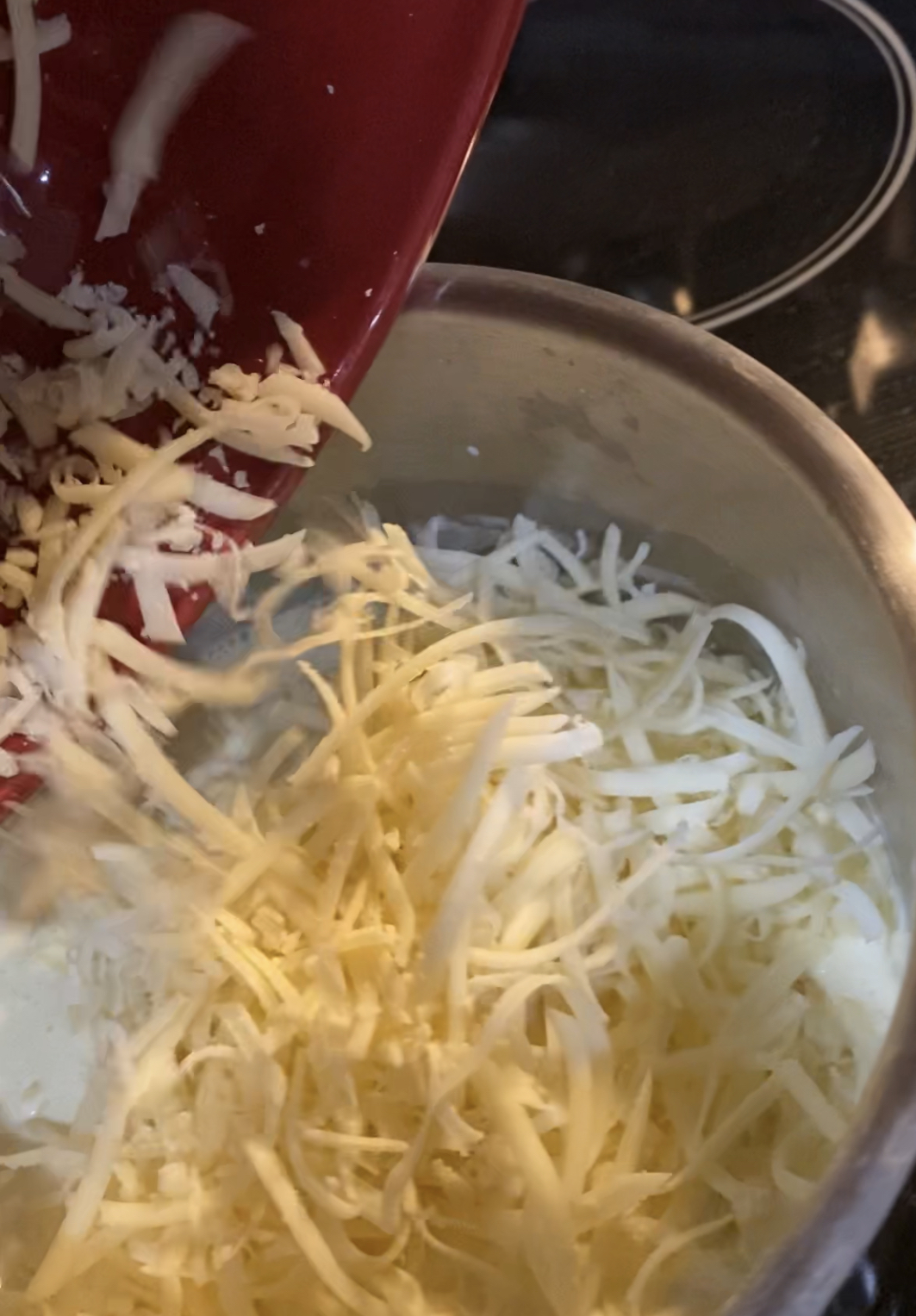 Stir in 1 of the 2 cups of the shredded Gruyere cheese until melted. Add salt to taste then set aside. 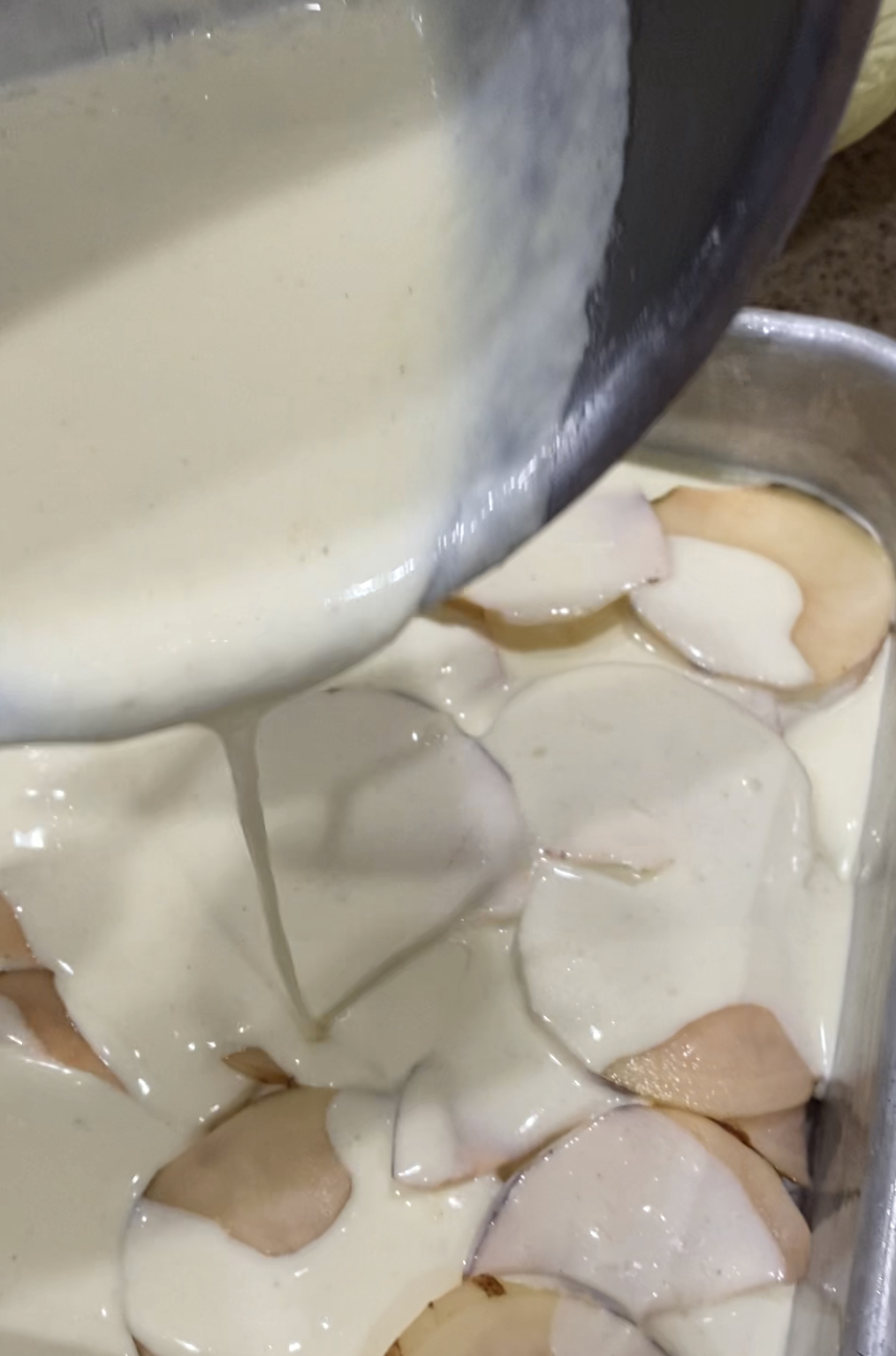 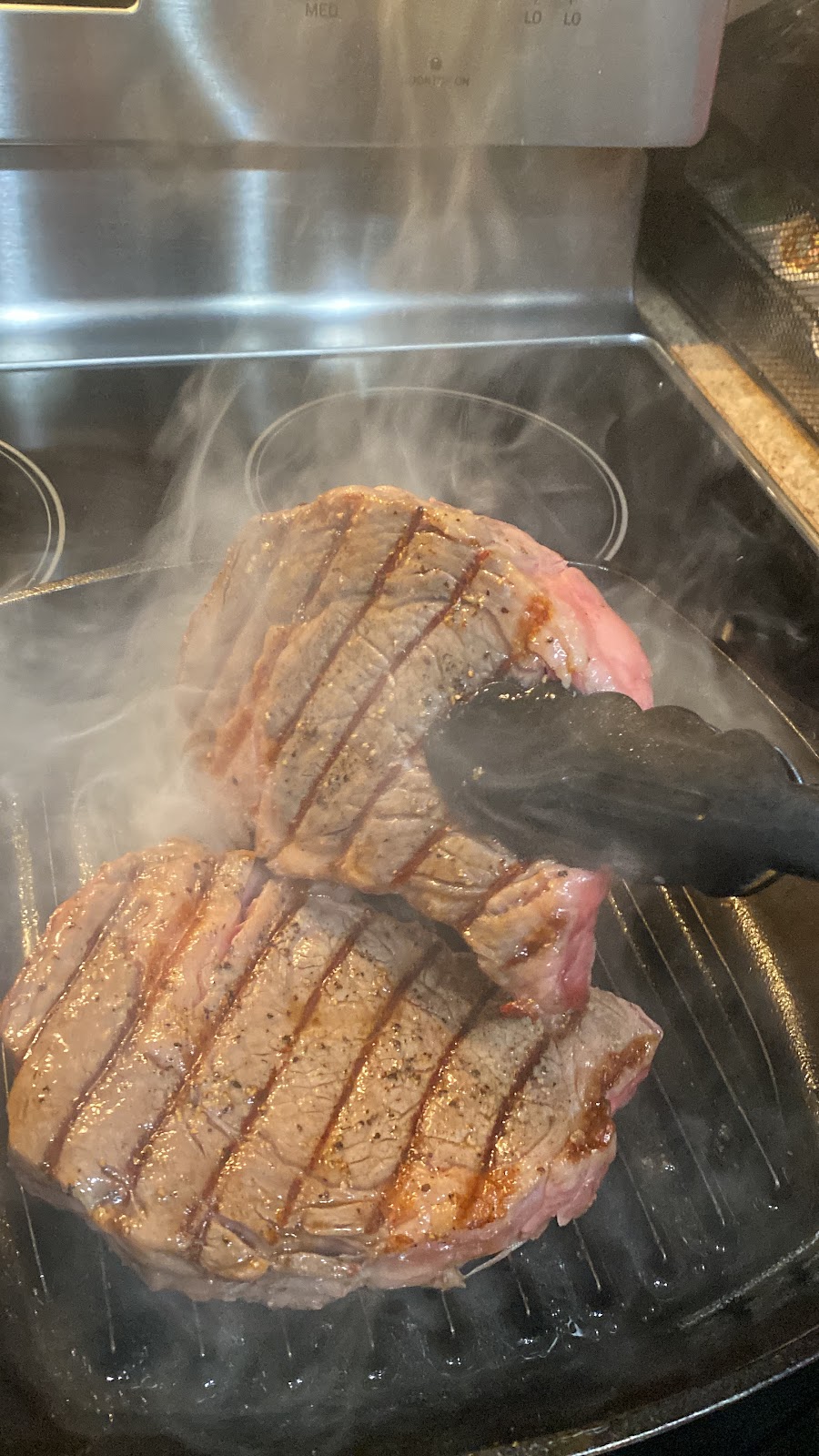 Once I took the foil off, I started the steaks. Since I can’t grill in the winter here, I have a nice cast iron grill pan. You can use any oven-safe pan, but the times will vary on cooking. I just rub a little olive oil on both sides of the steak and coat with coarse salt and pepper. Then I sear the steak on both sides for about 2-3 minutes. 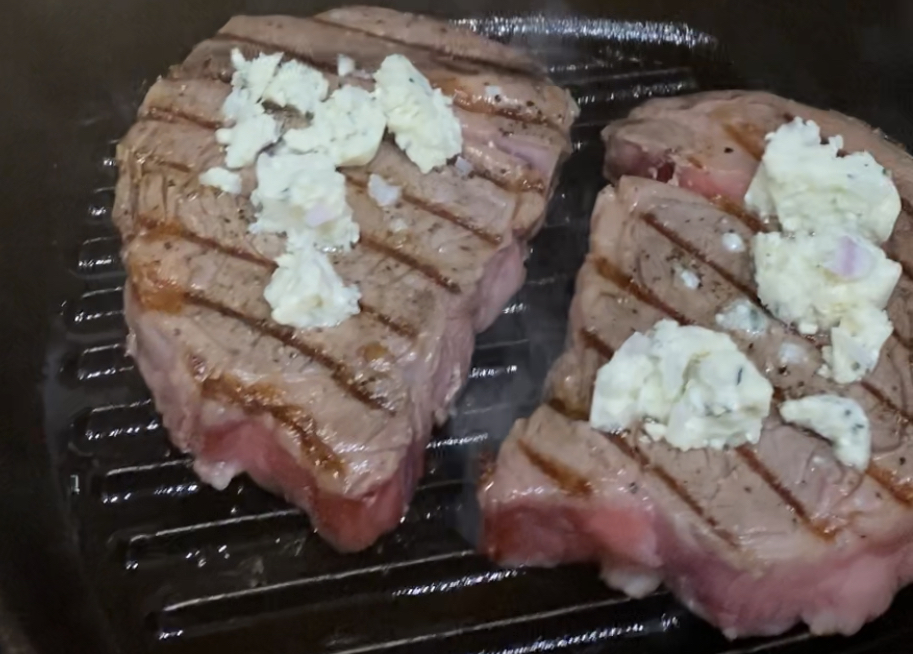 I then topped them with a healthy portion of the butter I made earlier on top and placed in the oven. I took the potatoes out at this time to rest and turned the temp up to 400 degrees. This is when it’s up to you on how you like your steak. It was about 10- 12 minutes for me. 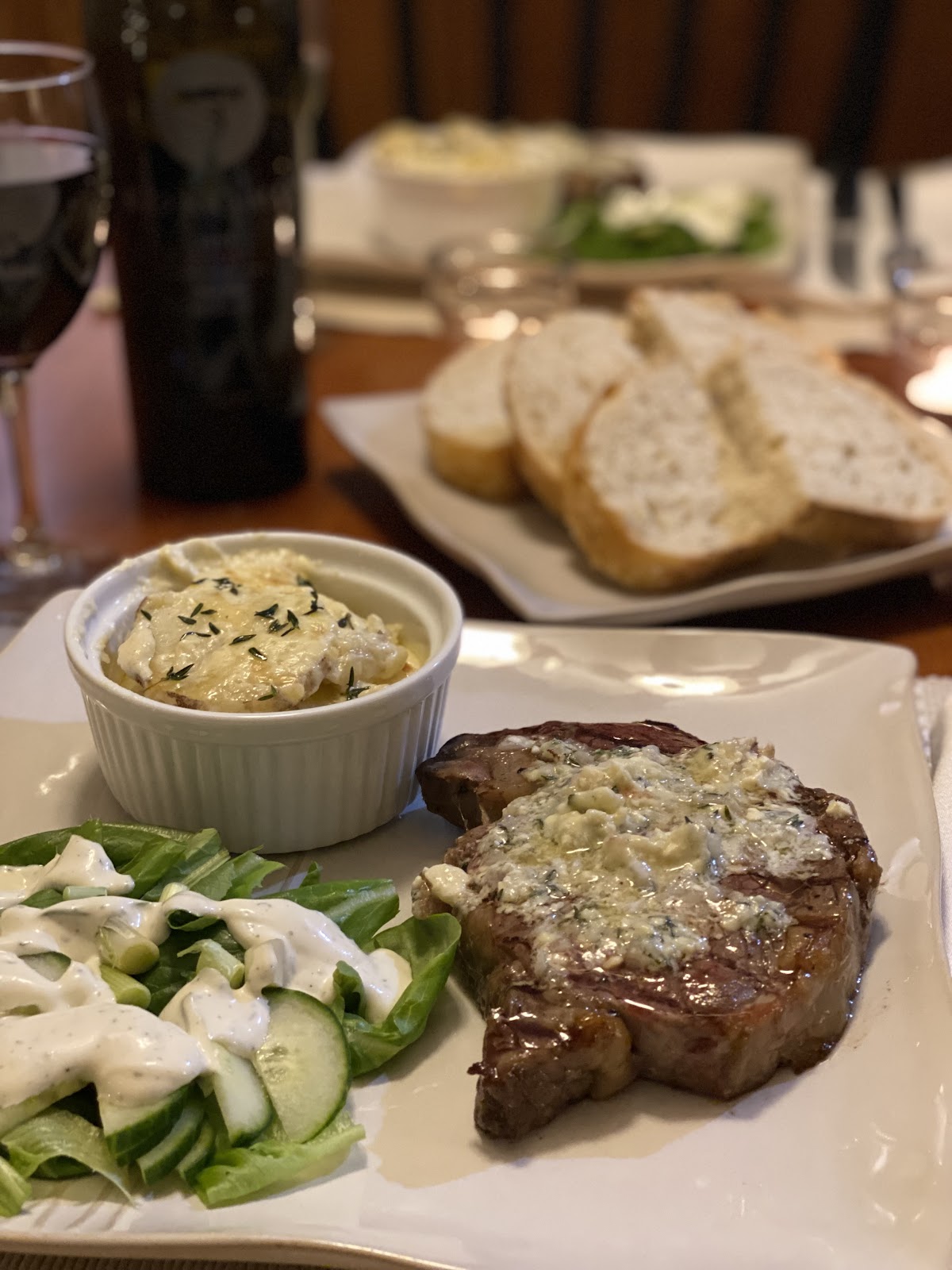 We made a nice side salad with cucumbers and used the homemade ranch recipe on the back of the Hidden Valley Ranch mix packet (1 cup mayo, ½ cup sour cream, ½ cup buttermilk). So Good! We also included some garlic sourdough bread from a local bakery and paired it all with Kokomo Cuvee Red wine. Overall, it reminded me of a nice steakhouse meal. And it was pretty wonderful for a New Year’s Eve dinner!

Have you had a steak at the Yachtsman? Where do you think the best steak on property is at? Let us know in the comments.

I’m so excited that we will be at Disney Springs at the end of the month. Where should we go to get inspiration for February’s recipe?