Retro Walt Disney World – Dreamfinder and Figment, and the ImageWorks

Walt Disney World, much like Disneyland, will not only never be complete, but is always in a state of change. And that’s a good thing… well, most of the time. Because unfortunately with change, sometimes we lose something in the process. And sometimes, it’s not just an attraction, show, or (dare I say), even a menu item from our favorite restaurant. Sometimes, it’s a person.

And in this case, it is (was) the Dreamfinder.

Think back to the original “Journey Into Imagination” in EPCOT Center – This 13-minute, multisensory experience was unlike any other in Walt Disney World. An instant classic dark ride, it was made up of 10 distinct show scenes that told the story of Figment’s journey to discovering how to use his (and our) imagination.

But upstairs, we enter the â€œCreative playground of the future, the ImageWorks. Open from 1982-1998, it has a number of interactive exhibits which lets us make use of modern technologies, and recreate scene elements from the attraction we just rode upon.

For example, Figment’s Coloring Book allows us to use a paintbrush-shaped cannon to draw on a distant wall and paint white shapes with Figment, while the Making Faces kiosk takes a photo of your face and allows you to draw on it using touch screen technology. Want to be an actor? Visit the Dreamfinder’s School of Drama, where you can your family can step in front of a blue screen and enter a western fantasy and sci fi film. And who can forget the oh-so-very-cool Sensor Tunnel, which is a rainbow tunnel of neon and mirrors that follows you as you walk though.

Other exhibits include the Image Warp (a mosaic wall of mirrors), the Stepping Tones, where you can create music by stepping on colored panels on the floor, the Pin Screen tables, and the Electronic Philharmonic, where waving your arms (often like a lunatic), could produce orchestral sounds and music through the use of invisible sensors. There are also giant Kaleidoscopes, Vibrating Mirrors, Bubble Music Projectors, the Magic Palette and Light Writer.

Boy, I could stay in here for hours!

Sadly, the Image Works closed in 1998 and reopened in 1999 as the Kodak What If Labs, and was later renamed the “Image Works – Kodak’s What If Labs.” And alas that was the least of the changes to the pavilion. And while Dreamfinder may be gone, he is not forgotten, as a door near the beginning of the ride pays homage to him with the name “Dean Finder” painted on the glass.

So I thought I’d share with you a retro photo of our good friends, playing in the Image Works.

A moment of silence please for our good friend and mentor, the Dreamfinder. May you rest in peace, you jolly fellow. 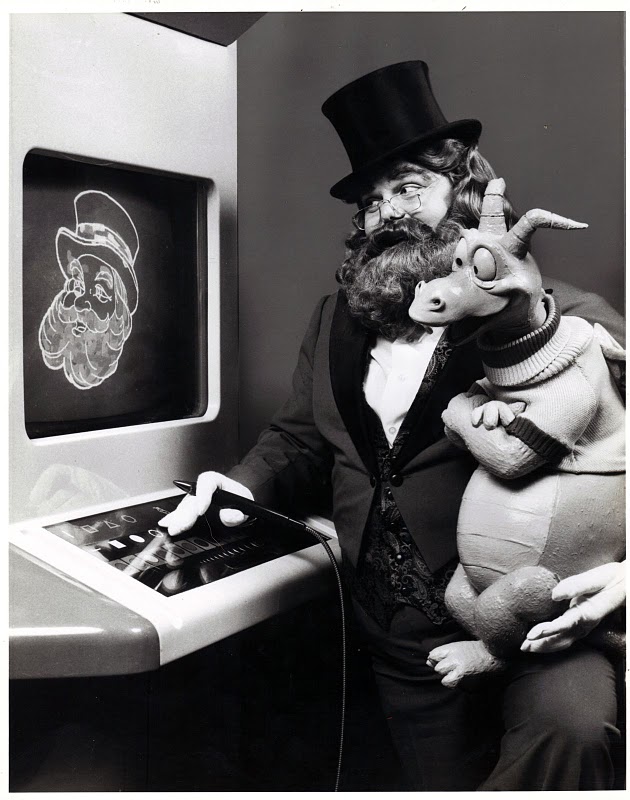