Grab your stretchy pants and join me at the table for a weekend brunch dining review recorded LIVE at Wine Bar George in Disney Springs.

Nestled inside Walt Disney World’s Yacht Club Resort, next to the Yachtsman Steakhouse, you will find one of the hidden gems of this resort. The Crew’s

Hong Kong Disneyland really is a local’s park. There is a massive community of Hong Kongers who have Magic Access passes (APs) and attend the

Recently I had an opportunity to try out the (relatively) new restaurant in the Italy Pavilion in EPCOTâ€”Tutto Italia. Located where the Lâ€™Originale Alfred de Roma Ristorante used to be, the Patina Restaurant Group-run establishment is considered to be a placeholder with a totally different permanent restaurant to be opened in the near future.

Wednesday, September 24th was a pretty lucky day for me. My flight to Orlando left early, and arrived even earlier. My suitcase was the third one on the baggage carousel, and the last one on before it stopped moving. My car was ready, and my room was even ready at Animal Kingdom Lodge despite it being before 10:00 a.m. So I was already on a roll when I met up with intrepid researcher Lou Mongello at Epcot, on a quest for food.

While we may have been hoping for a sneak taste of the Food & Wine booths, or maybe some sushi from Japan, we were surprised to see people inside the Nine Dragons Restaurant in the China Pavilion. The restaurant had been closed for many months for an extensive refurbishment, and no official reopening date had been announced as far as we knew. In the name of research, we decided to check it out for lunch. 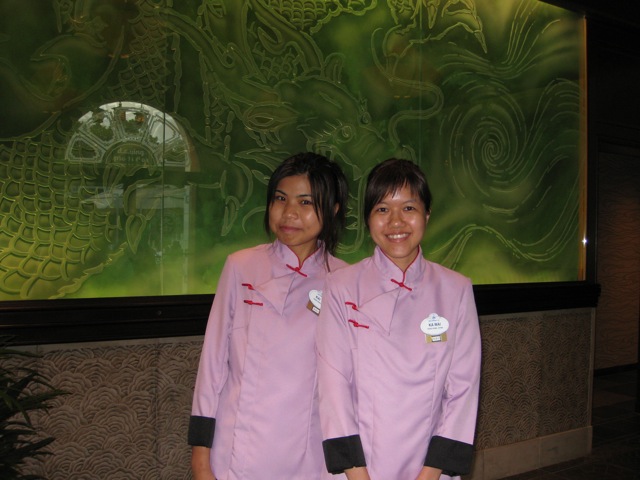 As we came in from the bright sunlight into the relative dimness of the lobby, we were startled by a very loud, very enthusiastic greeting in Chinese. At least half a dozen servers were there in the lobby to welcome us, which was a delightful, though slightly intimidating, surprise. It turned out that the restaurant had literally just reopened 20 minutes before we arrived!

Fine dining in Orlando used to take place at a table. Not so now. In
many of the city’s restaurants the best seats in the house are to be
had at the counter where a front row seat to the action in the kitchen
along with food and drink is the order of the day.

Walt Disney World has no shortage of places to eat – in fact, there are literally hundreds of dining options at this expansive theme park resort. But with so many options to choose from, how do you narrow down your choices? OrlandoFunTickets.com is here to help – below are the top restaurants on property for families, young adults, dining with characters and Disney’s top tables overall. While you are here checking out these popular restaurants, don’t forget to check out our discounted Disney tickets exclusively from OrlandoFunTickets.com, your No. 1 online source for discounted tickets to all of the top attractions in Central Florida, from the theme parks to other top attractions and even local dinner shows. If you want to see it, OrlandoFunTickets.com can help you experience it for less!

During a jam-packed Walt Disney World vacation you’ll sometimes just want to grab a light, but delicious dinner at one of Disney’s lounges. Below are a few great choices for appetizers, small plates, and fine wine:

Restaurant Review: Victoria and Albert’s:  Worth the Time, if You’ve Got the Dime.
By Jeanine Yamanaka

Recently, a minor hullabaloo arose over the decision of Victoria & Albert’s, Walt Disney World’s premier dining establishment, to disallow diners under the age of 10. After a recent dinner there, I can assure all our readers from 0-9 years that it is well worth the wait.

I think you really have to *appreciate* the ambiance of this place, and appreciate what it is they are trying to do. I can see

Restaurant Review: Aboard the Disney Wonderâ€”If Eating at Palo is Wrong I Donâ€™t Ever Want to be Right

So for the next installment in our culinary adventure on board the Disney Wonder, I take you to the one extra-charge restaurant on board ship, Palo.