Hello and welcome to The WDW Radio Show – Your Walt Disney World Information Station. I am your host, Lou Mongello, and this is show #205 for the week of January 16, 2011.

This past weekend, more than 54,000 athletes from around the world descended on Walt Disney World, as many do year after year, not for the attractions, shows or dare I say even the wonderful dining options, but to run. And run a lot.

The Walt Disney World Marathon weekend encompassed a series of endurance events, in which individuals came out to fulfill personal goals, experience the parks like never before, and for many, to make a difference in not just their own lives, but the lives of others. So on this week’s roundtable, we’ll look at the Walt Disney World Marathon as well as some other endurance events, and possibly introduce you to the idea that it’s not just for athletes, but for friends and entire families as well. Whether you visit to run, cheer, volunteer or for your favorite charity, it’s one of the most amazing experiences any Disney enthusiast can enjoy.

Iâ€™ll have a few announcements, and then play some of your voicemails at the end of the show, so sit back, relax, and enjoy this week’s episode of the WDW Radio Show.

Information and Links from This Weekâ€™s Show 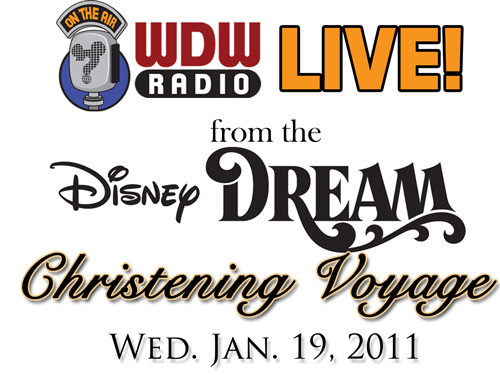 Join Lou Mongello from WDW Radio on the Christening Voyage of the Disney Dream! Wednesday, January 19, 2011

Lou will be broadcasting LIVE at http://WDWRadioLIVE.com/ as he boards the ship and from onboard throughout the day! Join us â€œin the box,â€ check out the new ship and share in the festivities! Planning on joining us? RSVP on the Facebook Event Page Stay tuned for more details as we get closer, and follow Lou on http://Twitter.com/LouMongello for instant updates

Join us for the WDWRadio Adventures by Disney Backstage Magic Tour!

DisneyMeets.com â€“ Join us for Disney fan gatherings and WDW Radio Meets of the Month in Walt Disney World and other events around the country! Get dates and locations here!

Lou Mongelloâ€™s Audio Guides to Walt Disney World -Available NOW as an instant download or on CD! Order all 5 on CD and save! Click Here to learn more or order!